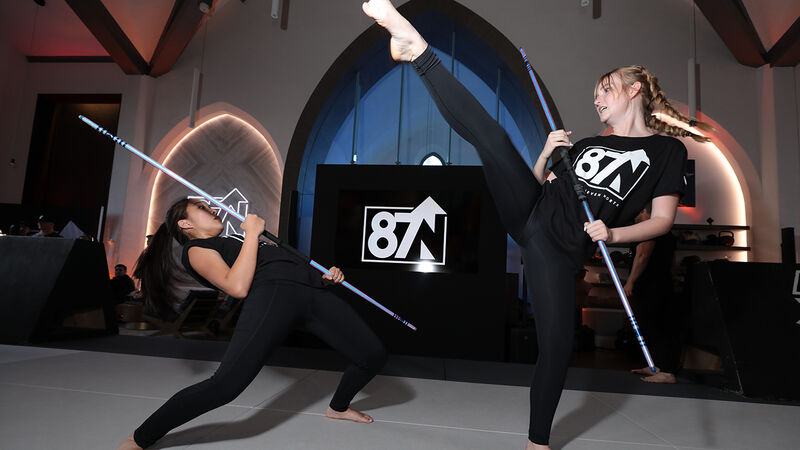 87North is a production company with a distinct identity, known not just for bringing us action films, but ones in which the stars do many of their own onscreen fighting and stunt work, including the likes of?Atomic Blond, Nobody, and the?John Wick?series.

With a ton of upcoming projects in the pipeline (including Ryan Gosling starring in a movie version of the classic TV show?The Fall Guy?and a sequel to?Nobody), the company, in partnership with Universal, has now graduated to an eye-catching, upgraded new training facility where they can work with actors to increase their skills and plan out memorable action sequences and stunts for their films, and last week a big launch party was held to celebrate.

Housed within a former church ¨C a video game company was the most recent occupant ¨C 87North¡¯s new home is very visually distinct, boasting plenty of workout space, offices, and notably high ceilings and windows from those aforementioned church days. Stars like Bob Odenkirk (Better Call Saul,?Nobody), Sebastian Stan (The Falcon and the Winter Soldier), and Samara Weaving (Ready or Not) were on hand at the event, joining 87North¡¯s founders, the husband and wife team of David Leitch and Kelly McCormick. Leitch and McCormick produce their films, with Leitch also directing many projects, including Hobbs & Shaw, Deadpool 2, Atomic Blonde,?and?Nobody?(he co-directed the first John Wick with longtime colleague Chad Stahelski).

Shortly after a very cool and impressive stunt and fight demonstration from the 87North team — which culminated in two gentlemen leaping off the balcony on either side of where I was standing — I spoke to Leitch about what it meant for 87North to get this new home, the joy of seeing actors like Keanu Reeves, Charlize Theron, and Odenkirk become such adept onscreen fighters, and a bit about the next 87North film, the Brad Pitt-led?Bullet Train.

While he and his colleagues have been doing this for many years now, Leitch said getting this new facility, ¡°Means a lot. It means there’s a lot of trust from Universal and the product that we’re making to really give us some funding to do something like this. Without their support, we wouldn’t have this place. We just love what we do and I think we put our passion into our work and put our money back into making our business grow.¡±

As for the specific space in question, when asked if they very quickly knew it would work for them upon seeing it, Leitch replied, ¡°100%. It was one of those instant moments where you walk in the space and you knew that it was right.¡±

Besides simply having the amount of varied space they needed, he also noted that, given they film a lot of test footage, the lighting in the building through the old church windows was a factor as well, remarking, ¡°The light in here is really beautiful during the day and kind of captivating. It’s hard to shoot a bad shot in here. It’s very cinematic and it really leads to a lot of creativity.¡±

87North has helped a ton of actors get into fighting shape for films, sometimes growing leaps and bounds in their skillset. Describing what it¡¯s like to see this evolution before their eyes, Leitch said, ¡°I do love it. You know, I think ever since?The Matrix?films, when we really saw how we could [collaborate]¡­ We were part of the team that trained the actors and you got to see them transform into martial artists. We really understood like, oh my god, this is special, to actually get an actor to be able to do their [own] action and not break character with a stunt double.¡±

87North feel teaching an actor to do so much on screen in an action role can be crucial, with Leitch adding, ¡°It’s special and it’s also empowering to them. And it helps them to find their characters. There’s just so many positive benefits to the product in having the actor gain the ability.¡±

Said Leitch, of working with this group and honing their fighting skills, ¡°It was one of the best film experiences I’ve had in my life. They¡¯re some of the most talented and collaborative actors I’ve ever worked with. Brian Tyree Henry and Aaron Taylor Johnson are spectacular together. Their chemistry is amazing! And Brad, there’s nothing that needs to be said. He’s at the top of his game and he came to play and created a really fun, compelling character that people are going to love.¡±