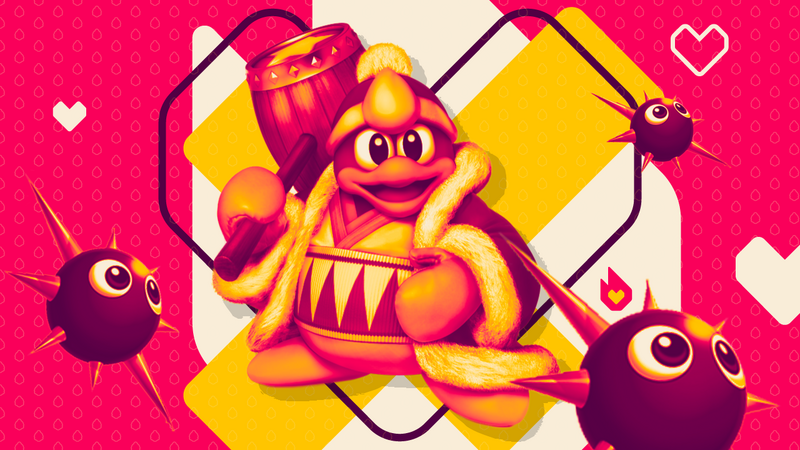 A Love Letter to King Dedede

Light of my life, fire of my loins. My sin, my Star Rod. De-de-de: the tip of the tongue taking a trip to thrice stroke the alveolar ridge.

Dread monarch, for so long have I admired your virile frame from afar, each element more divine than the last. Shall I enumerate them? Not all, for the world has only so many minutes left in it; but I will address the grandest ones, by my estimation, that you might be reminded of your own beauty.

Your face: the waxen beak, golden, a regal curve down which two vigilant eyes stare. What have those eyes seen? What secrets, what errors? When they catch in the mirror a reflection of your patient countenance, do they, too, well with tears to behold its glory?

Your body: the supple waist and brilliant plumage, azure as the very firmament over which you claim dominion. Your many royal feasts are sucked down a sturdy gullet, that your mighty gut might absorb their sustenance. At a distance, you are a blue cloud, emitting a kingly wheeze as you heft your mighty mallet over muscled shoulders.

Your hammer: ah, a weapon as storied as your kingdom. The god of thunder himself would covet such an instrument, and what strength a king would require to wield it! Thousands have you laid low, that millions more would look upon that hammer and know it stands for Dream LandˇŻs glory.

Under your reign, Dream Land has prospered like never before. Its mass starvation and pestilence are unrivaled worldwideˇŞa cruel feat, yes, but impressive nonetheless.

I make unto you a hard confession, my king; so shall my anticipation prevent your discovery, and my secrecy to Your Highness moult no feather: I was once plastic to the countless barbs and blasphemies leveled against your character. Propaganda is a foul weapon (not to be confused with a fowl weapon, like your mighty hammer), and there was a time in my miserable youth where I believed you to be, as many do, Dream LandˇŻs antagonist, not its savior. I thought you cruel when you are merely just; I thought you conniving when you are merely cunning. I had been convinced your claim to the throne was foundless, and your ambitions were those of a scheming madman.

Whence come these malignant slanders? Oh, my king, I would not invite your rage, but permit me to name the culprit: that wicked whoopie cushion, the pink menace named Kirby.

I hiss at the mere mention of his name, milord. I hiss!

Kirby is a sphere of great renown, O Majestic Penguin. His exploits are lauded by the unwashed masses, who will call anyone a hero if his conviction is deep and his brutality is worn on his little sleeve. These Waddle Dees and Doos are pliable, lord. Their allegiance is inessential to your rule. If they should assemble beneath the banner of a usurper, then let the hammer fall on them, too. All the heroic exploits in the world cannot hope to sway a Waddle Dee already committed to a great lie.

But this letter is not to the gluttonous Kirby, my king. It is to you. I say I have long admired you, but in truth, it is something far more profound than admiration. So do we arrive at my most disgraceful of confessions.

In all my dreams, you hold me against your breast with eagle wings. Our gazes meet. Your black eyes narrow. A moment of electric silence, and thenˇ­ No. I shan’t go further.

It is said that Dream Land itself was born from the cloaca of its first god-king. Thus I, proud Dream Lander, can think of no greater honor than to be born from yours. And so, in my dreams, I am. This majestical orificeˇŞof which my gastropodical class is deprivedˇŞis equipped to handle the elimination of all bodily wastes, whether they be excretory or reproductive. All of the bodyˇŻs filth and squalor passes through this noble hole. So too should I, for your subjects are the filth of mundanity, sloughing off divinityˇŻs swollen walls. And while I have long been coughed from mortal womb, I would be a credit to my class if I could but sip from that eternal fount.

These forbidden thoughts and more pervade my waking life. When I dream, I am with you; when awake, I march ceaselessly towards that dream. You are my regent, my lord, and the owner of my heart. My letter has professed all of this to you, in mealy and perhaps even repellent detail. Know that while I do not deserve your love, I remain yours with or without it. I will serve you to the last, in whichever form service might take. Be well, Prince of Plumage. May you soar forevermore, and may I bear witness to each new glory.