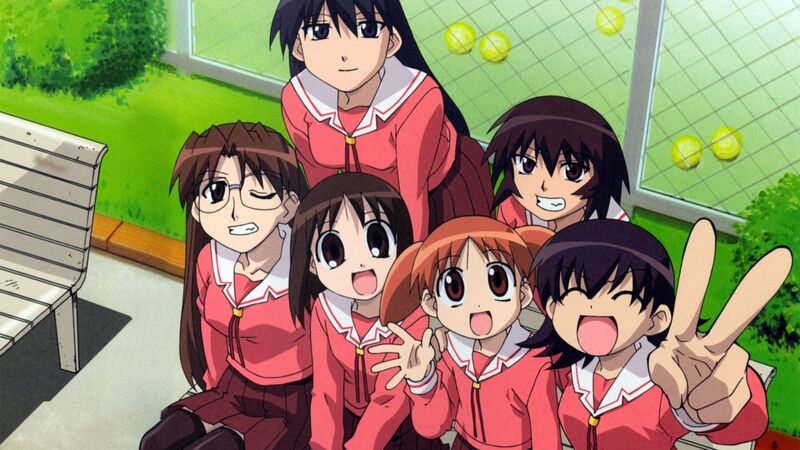 Being 13 is one of the hardest things I’ve ever done.

It was a horrible whirlwind of hormones, fumbling social interactions, and crying in the bathroom at school dances. (The mascara said it was waterproof. It was never waterproof.) Like many other adolescents struggling to keep their heads above the raging waters of puberty, I turned to media for comfort. Specifically, I turned to anime and manga.

Suddenly, there was a whole cartoon world at my fingertips, a land of infinite possibility waiting in the graphic novel section of Borders (RIP): the wish fulfillment romance of Fruits Basket and Ouran High School Host Club, the pastel excitement of magical girl stories like Sailor Moon and Cardcaptor Sakura, and the tension and adventure of Fullmetal Alchemist and D. Gray-man. These shows were escapist fantasy—there wasn’t much in them that I could recognize from my own life.

Then, I stumbled upon a little show called Azumanga Daioh, and I fell in love.

Unlike the shonen anime where female characters were sexualized and idealized—let’s just get this out of the way, human boobs don’t do that—or shojo series where the leads were cooler, kinder, and more magically inclined than I could ever hope to be, the girls in Azumanga Daioh felt incredibly human.

Instead of worrying about mythical monsters invading Earth, or falling in love with vampires, these girls were preoccupied with fitting in at a new school, dealing with a crush on a classmate, or attempting to befriend a stray cat. Also, these girls were weird as hell (in the best possible way). I recognized myself, and my best friends, in all of them, and it made me feel right at home.

Revisiting the series all these years later, I still feel that kinship with the cast of characters. They live in a heightened world filled with ridiculous, cartoonish scenarios, but their personalities are grounded. They’re weird—spacey, angry, nuanced, and wonderful. They remind me of myself at that age, of my friends, classmates, even the girls I was too intimidated by to ever talk to, and there’s something comforting and familiar in every character, no matter how silly.

Chiyo Mihama is, admittedly, one of the most unrealistic elements of Azumanga Daioh, but she’s also one of the most endearing. She’s a child prodigy who skipped five grades due to her advanced intellect, and (while that sounds like it might make her the absolute worst) she’s actually the best. Maybe this is my own personal bias as someone who was the youngest in my class, often feeling insecure or out of the loop because of it. Regardless, Chiyo’s struggle to fit in with her peers and live up to the expectations placed on her really hits home.

Even though she’s blessed with exceptional talents, Chiyo is naive and anxious, often worrying about burdening those around her. Rather than ostracizing her, though, her classmates embrace her and appreciate her childlike wonder (because, y’know, she’s a child) and even position themselves as big sister figures to her. Even if she has difficulty with socialization and self-esteem, Chiyo is joyful and loving, approaching the world with open arms and an even more open heart. Also, Chiyo has a great big fluffy dog that she can sit on like he’s a horse, and if you don’t think that’s adorable then you’re probably dead inside.

On the surface, Sakaki is every inch the Cool Girl. She’s tall, pretty, aloof, and a natural athlete. She rarely speaks at school, which her classmates interpret as her being a mysterious loner who has no time for peasants like them. However, this could not be further from the truth. Sakaki is actually an incredibly shy, highly sensitive ball of neuroses. (Same, girl.) Because of her ice queen image, her fellow students assume she has no interest in cute things, and that she must consider them childish. Secretly, though, she is obsessed with all things cute, especially animals. She wants a pet of her own, but can’t have one due to her mother’s allergies, and instead spends her time drawing terrible doodles of cats in her notebooks. Her greatest goal is to befriend the stray cats that live in her neighborhood, but, like her classmates, the cats are intimidated by her, and they always end up biting her when she tries to pet them. Though Sakaki represents everything Chiyo wishes she could be, Sakaki wishes she could be more like Chiyo, someone who wears their feelings on their sleeve and openly loves what she loves. No spoilers, but one of the most emotionally resonant moments of the entire series centers around Sakaki finally befriending a feral cat and, yes, it makes me cry every time. Don’t look at me.

I don’t have a favorite Azumanga Daioh character, but if I did, it would be Osaka. Nicknamed for her hometown, Osaka is a transfer student from, you guessed it, Osaka. She has an easy-going demeanor, a tendency to daydream, and a lot of difficulty focusing on her schoolwork (or really anything that’s going on around her). She has a hard time with sports, she gets terrible grades, and she can’t even touch her toes. (Girl, same.) She takes on the world with a unique perspective and a genuine appreciation for the little things that others may take for granted. She’s living life at her own pace, and refuses to change herself to conform to the expectations of others. The way her mind works eludes most people’s understanding, but she’s just fine with that. She’s coming in last at the bread-eating race during the Sports Festival, but she’s enjoying the hell out of her piece of bread.

Kaori is a shy, anxious girl, who fades into the background most of the time. There is just one thing that sets her apart from the rest of the characters on the show: she has a crush on Sakaki. [Editor’s note: Big same, girl.]?Though she’s cagey about her sexuality, frequently saying she’d be in love with Sakaki regardless of gender, she has unambiguous romantic feelings for the other girl. She doesn’t have much else going on aside from that crush, but when a teenager’s particularly powerful infatuation with a classmate becomes approximately 90% of their personality? That rings pretty familiar to me. Just make it to college, Kaori—you’ll have better luck there.

Tomo has absolutely no impulse control, and I love that about her. She’s high-energy and hyper-competitive, in spite of being a slacker who prefers relaxation to studying. She believes in herself even when she has no rational reason to, constantly challenging her friends to academic and athletic contests (even though she always loses). She has no filter and does and says whatever pops into her head at any given moment, regardless of consequences. However, when she actually decides to put her mind to something, she is able to accomplish impressive feats. Like many of us out there, her greatest motivator is spite. If someone tells her she can’t do something, then dammit, she’ll make it happen.

Yomi is the perfect counterparty to Tomo. She’s the voice of reason, the mom of the friend group. Just look at her glasses! Clearly, she knows what she’s talking about. She’s not perfect, though. She struggles with her body image, and frequently tries various diets in order to change her looks. It’s a huge bummer, but deeply relatable to most of the teenage girls out there (especially those of us who grew up with the toxic messaging of the early 2000s media). Thankfully she never sticks to these for very long, and chooses her love of her favorite foods over trying to look a certain way. She has a passion for karaoke, in spite of being a horrible singer, which is perfect. After all, karaoke is really all about the attitude you bring to it. No matter how much she positions herself as the most mature member of the group, Yomi is still just as much of a kid as the rest of them, and is still in the process of growing, stumbling, and figuring herself out.

Kagura joins the cast later in the show, but she completes the holy trinity of goof-off slackers along with Tomo and Osaka (nicknamed the Bonkuras, or “Team Idiot” by the rest of the group). Like Tomo, she has an impulsive streak, but unlike her friend she has an ounce of self-awareness and tries to keep it under control.

When I first discovered Azumanga Daioh, I found the two main teachers to be entertaining characters, but I didn’t really feel much kinship with them. Now, over a decade later, I feel quite differently. As a teenage girl, I was Chiyo and the rest of her friend group. Now, even if parts of my younger self live on in me, I feel much closer to Yukari and Minamo, the homeroom and gym teachers, respectively.

Yukari is the kind of teacher to turn a chair around and sit on it backwards. She gives off massive “how do you do, fellow kids?” energy, and I say that with nothing but love in my heart. To her credit, she has a lot in common with her students. Most importantly, she doesn’t condescend to her students, and they love her for it.

Minamo, Yukari’s best frenemy, is a measured person who generally demonstrates an even demeanor and control of her emotions. Naturally, this infuriates Yukari, who desperately tries to one-up Minamo at every turn with increasingly petty antics. She’s not always completely buttoned up, though. If you get some sake in her, she’ll talk your ear off about the salacious dating antics of her youth. I’m not sure if they’re people that should be trusted with molding young minds, but I’d definitely like to go out drinking with the both of them.

Fans of the show will have noticed by now that there’s one major character I haven’t mentioned: Mr. Kimura, one of the teachers known for harboring creepy feelings toward his students.

That was a deliberate choice, as I don’t care for Mr. Kimura. I don’t like the way he looks at teenage girls, I don’t like the way he talks about teenage girls, and, frankly, I’d be perfectly happy if he fell into a sinkhole and disappeared forever. In fact, I think we should retire the “laughable pervert” archetype from anime altogether. I’m not laughing; I’m plotting his untimely death. But the show is 20 years old now (oh god, the passage of time is terrifying, isn’t it?), so it’s bound to have a few bits that don’t age well.

Azumanga Daioh may not be a perfect series, but it holds a special place in my heart. It captured the pure essence of adolescence, something that few anime have managed to encapsulate so perfectly. I’ll always be grateful to it for showing me that you don’t have to save the world, fall in love, or pilot a giant robot to be the hero of your own story. Sometimes, you can just be a delightful little weirdo having fun with your friends, and that’s more than enough.

Addison Peacock
Addisonrpeacock
Addison Peacock is a writer, voice actor, and podcaster. She hosts the romance game podcast Playing Games With My Heart (@heartgamespod). When she's not playing dating sims, she can be found writing about and making horror and comedy content all over this big beautiful internet.