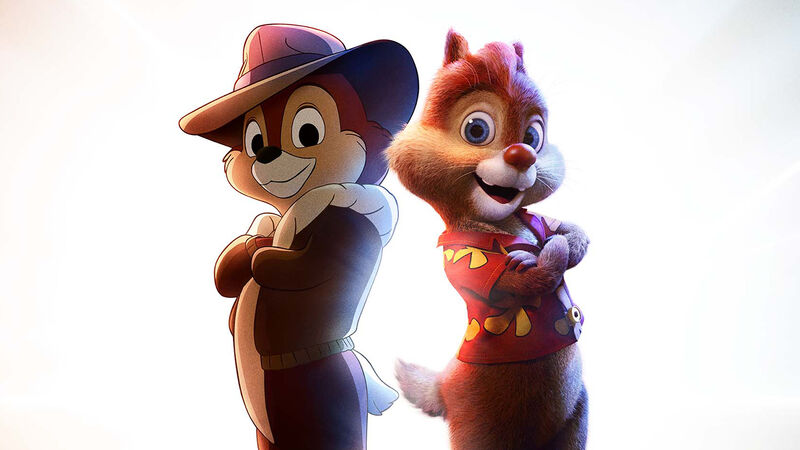 Having directed projects like Hot Rod, Popstar: Never Stop Never Stopping, I Think You Should Leave with Tim Robinson, and, of course, many an SNL Digital Short, The Lonely Island¡¯s Akiva Schaffer turns his eye towards two beloved animated characters with the new Disney+ movie, Chip ‘n Dale: Rescue Rangers.

A meta twist on the late-1980s/early-1990s animated series of the same name, the comedy film is a live-action/animation hybrid, envisioning a world in which Chip (John Mulaney) and Dale (Schaffer¡¯s fellow Lonely Island member, Andy Samberg) were the stars of the show Rescue Rangers, only to have a falling out. Decades later, the duo are reunited when the disappearance of their old costar, Monterey Jack (Eric Bana) turns out to be connected to a larger conspiracy involving other animated actors.

Chip and Dale¡¯s new adventure takes them through modern Hollywood and its connected world of fan connections and nostalgia, including encounters with many familiar characters in a manner that can¡¯t help but evoke Who Framed Roger Rabbit. Schaffer spoke to Fandom about whether we should consider Chip ‘n Dale: Rescue Rangers a continuation of sorts of Roger Rabbit, why the meta approach felt right,?and just how complicated it was bringing in so many other characters, from both within Disney and without.

Like Who Framed Roger Rabbit, Chip ‘n Dale: Rescue Rangers is set in a world where humans and cartoon characters co-exist both in everyday life and making films and TV shows together in Hollywood. Beyond that, it also uses the term ¡°toons¡± like in Roger Rabbit, and Roger himself makes a cameo – and there is at least one other notable nod to Who Framed Roger Rabbit and what we saw in that film, for those paying close attention.

So should we consider Rescue Rangers to be officially set in the same universe as that beloved classic?

Asked this question, Akiva Schaffer wouldn¡¯t say for certain, replying, ¡°I wouldn’t be so bold as to impede on that. I’m leaving that open ended. If you choose to believe it is… I mean, he’s there! But you know, he could be visiting their universe…¡±

When it came to that 1988 Robert Zemeckis film, Schaffer remarked, ¡°Roger Rabbit, I hold in such high esteem. It’s just the gold standard of this stuff, of the live-action/animation hybrid. It blew all our minds when it came out. And you watch it now and it still kind of blows your mind knowing how they did it and the artistry. Certainly, without Roger Rabbit, there¡¯s no this movie, and so any comparisons are welcome¡­¡± He added, with a laugh, ¡°As long as they’re favorable, I guess!¡±

A Rescue Rangers movie had been in the works for years, though initially, it wasn¡¯t going to have the same approach as what it eventually turned into.

However, Schaffer said by the time he joined the project, and began collaborating with writers Dan Gregor & Doug Mand (How I Met Your Mother, Earth to Ned) they¡¯d decided that was the direction to go in, recalling, ¡°I first got sent the script in late 2018 and? it was already this take. There’s lots of stuff that has changed since then but the big building blocks were in place. It was the meta [approach]. it was a TV show, they were actors, with what I call the Galaxy Quest, Three Amigos, Tropic Thunder of it, that was all in place.¡±

Schaffer said he was excited by exploring what he called ¡°The Roger Rabbit world, but with 30 years of newer animation mixed in, of video games, and Mo-cap and Pixar and puppets, and stop motion. That was all in there. When I read that script, even the title page said The Chip and Dale Rescue Rangers Reboot That Nobody Asked For.¡±

In addition, Schaffer said plans for the film changed as the industry changed, noting about?Rescue Rangers¡¯ earlier days of development, ¡°This is also before streaming really took off and before Disney+. So it was being developed as a possible theatrical, but obviously would have been a very experimental theatrical movie, so it also didn’t really have a place to go. But that’s part of what made me interested in it.¡±

As for his own background with the source material, Schaffer noted, ¡°I was a fan of Rescue Rangers from when I was a kid but I hadn’t really seen it in 20 years. Because also there wasn’t Disney+ [yet], so if you wanted to see it, you had to find a YouTube clip, or buy the DVDs on Amazon, which is what I ended up doing once I got the script in front of me. But I grew up in the right age; I grew up with Disney Afternoon.¡±

Rescue Rangers is filled with familiar characters, many from Disney ¨C including the Three Little Pigs, Scrooge McDuck, Baloo, Flounder, Pumbaa, and the aforementioned Roger Rabbit ¨C but also plenty from other companies, some in rather unexpected ways.

When it came to what they could include from Disney¡¯s perspective, Schaffer laughed, ¡°I felt like everything was on the table until it wasn’t,¡± noting that, in fact, when it came to pre-existing characters from both Disney and other companies, ¡°I’d say it was about equal the amount of both that we ran into roadblocks on. I don’t think it was even easier to get Disney. People kept saying like, ¡®Oh my God, that¡¯s amazing. You can get any Disney thing you want!¡¯ I was like, ¡®We probably got more nos from Disney than third party places.¡¯ But that’s also because they merged with [20th Century] Fox. And then by the time this movie is coming out, they own, you know, everything!¡±

Schaffer said Disney¡¯s acquisitions kept surprising them. ¡°We¡¯d be like, ¡®Oh, let’s get The Simpsons because that’s from a different world!¡¯ And then we¡¯d realize, ¡®Oh, but technically Disney owns it.¡¯ Because it was so important to me to make it feel like it’s for all of animation, not just Disney Animation, not an ad for Disney plus. But they made it harder and harder by slowly gobbling up every other piece of IP out there!¡±

The other characters in the story evolved over time for many reasons, with Schaffer explaining, ¡°You’re writing it just for what you as an audience member would want to see and what’s the funniest. Some thing’s changed because they didn’t make sense in the story anymore or [we¡¯d realize] we have too much from 80s TV, so let’s look for some 90s anime.¡±

In addition, he noted they also realized it made more story sense if certain characters were unfamiliar, explaining, ¡°This is just the real world and not everyone’s famous. It’s just a world with cartoons and people. So like, the school teacher is a cow, but it’s not a famous cow. It’s just a cow we invented. You want it to be a blend. Some people drive a bus and some people are famous. It was a mix of bespoke original drawings where I would just ask the animators, ¡®Alright, draw me a bus driver in the style of Xerox animation from Robin Hood era,¡¯ and then they would just take that style and make a new character.¡±

There are some especially funny and surprising cameos in Rescue Rangers and while Schaffer is prepared for them to be spoiled for some by earlier viewers, he does prefer if that weren¡¯t the case. Remarked the director, ¡°You know how hard it is to keep a secret. I wish the whole internet could keep a secret for the whole first weekend. You just know it’ll be the people who watch it at midnight, and that’s such a small amount of people, but then everyone else wakes up in the morning having it ruined. On the plus side, it’ll get them to go watch the movie but the other side, I’m like, ¡®Ah, man, give it a little time!¡¯¡±

When it comes to the characters in the film from non-Disney owned titles, such as My Little Pony, Schaffer explained just how many obstacles needed to be cleared, noting, ¡°The legal department at Disney deserves a big box of chocolates from me and the other makers of this film because they had to spend more time on this…. I’d be very curious if they keep track of their hours the way a lawyer has billable hours to see if this movie, over the last two years, took more time than all their other movies combined. That would be my guess!¡±

Giving one example, Schaffer mentioned MC Skat Kat, the animated, rapping cat who first debuted in Paula Abdul¡¯s 1989 “Opposites Attract” music video, before getting his own album in 1991 (hey, it was a wacky time!). MC Skat Kat and Abdul appear in Rescue Rangers in a sequence set during the heyday of the original Rescue Rangers, and Schaffer said, ¡°It’s very easy for me to be like, ‘Alright, it’s the 1990s. Who’s the coolest person to have if you were the Rescue Rangers at their wrap party?’ Oh, MC Skat Kat and Paula Abdul! Well, that would be the coolest party in town!¡¯ Well, then they have to figure out who owns MC Skat Kat and then track down those rights.¡±

It hardly stopped there though. Said Schaffer, ¡°A lot of times, those lawyers had to do a pitch about the movie to another set of lawyers; to, say, the Mattel lawyers going, ¡®Okay, here’s what we’re doing, here’s why it’s cool, here’s why it’d be cool to be involved.¡¯ And then sometimes they push them over to me and I do a whole presentation. And then, even if you get a yes, then there’s all these approvals and all these details. Like can you use that character in marketing? Every character is a huge deal and that’s before it even goes to animation where now they have to draw a whole character for one shot, which is the thing you never want to do in animation because it¡¯s the most costly thing you can do. And this movie had a very modest budget by animation standards because it is a bit experimental. I didn’t blame them for the budget but it was definitely had to be a bit of a labor of love for each department, including the legal department, to get any of these things done and to try to honor as best we could the like legacy of these characters and do do right by them within the constraints that I just mentioned.¡±

Once a character from the past was secured, Schaffer said the final steps often included bringing in talent already associated with the character, noting, ¡°Getting the legacy voice actors, where appropriate, in the movie, where we could, was super important to me. And getting artists who worked [on them]. Like for Roger Rabbit, we got an artist who worked on Roger Rabbit and we got Charles Fleischer to do the voice. When those moments were happening, I was like, ¡®This is the goal!¡¯¡±