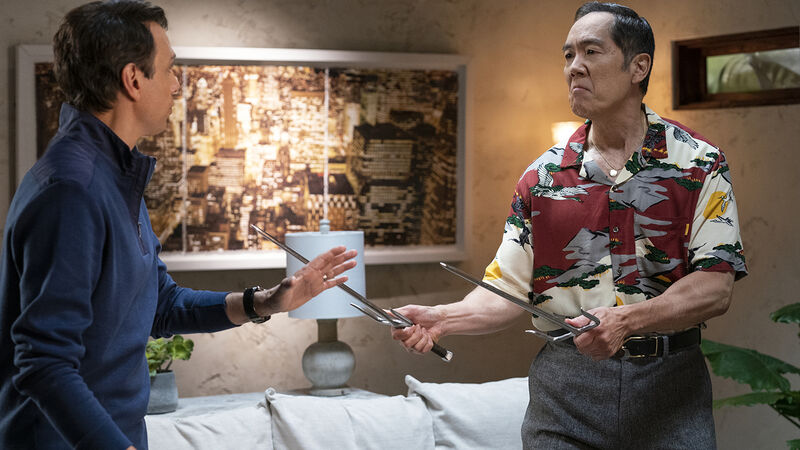 It¡¯s been scorching hot in the Valley lately and you know what that means for Cobra Kai¡­ The same thing it means every part of the year in the Valley,?which is karate fights galore!

The beloved series returns this week on Netflix for Season 5, picking up from the big events that ended Season 4, as Cobra Kai defeated both Miyagi-Do and Eagle Fang in the All Valley Karate Tournament, following an agreement that whoever lost would close their Dojo forever. Of course, it turned out Terry Silver (Thomas Ian Griffith) had paid off a referee to ensure a victory, even as Daniel LaRusso (Ralph Macchio) vowed to not stop in his quest to bring Silver and Cobra Kai down, agreement be damned, and brought in help in the form of another former nemesis, Chozen Toguchi (Yuji Okumoto).

When The Karate Kid Part II villain Chozen first made his redemptive Cobra Kai debut in?Season 3, it was during Daniel¡¯s visit to Okinawa, meaning Chozen never interacted with anyone else in Daniel¡¯s life back home. That changes in Season 5 though and fans have been excited by clips and imagery showing Chozen standing alongside both Daniel and Johnny and even getting a glimpse of Johnny and Chozen fighting together for the first time.

Said Hayden Schlossberg, ¡°In Season 5, for fans of the original movies, it’s a trip to see some of these characters interacting together and being in scenes that you’ve never seen before, that you couldn’t possibly imagine. Almost every antagonist that Daniel has faced in his life is suddenly all coming back into his life, all in this season, from Johnny, to Kreese, Chozen, Silver, Barnes… Every challenge, every obstacle that he’s ever faced is suddenly back in the Valley and they’re all interacting with each other.¡±

When it came to uniting these characters, Schlossberg added, ¡°We found the organic way to get them in scenes together and it’s just a trip to watch it. There’s a lot of comedy but also a lot of action because all it takes is poking one of them to start the karate domino effect. It’s really entertaining scenes and for fans of the franchise, it¡¯s gonna be really exciting.¡±

THE BAD BOY IS BACK

A few weeks ago, it was revealed that Mike Barnes would be a part of?Cobra Kai Season 5, bringing Daniel¡¯s second All-Valley champion opponent from his teen years back, following Johnny, now that Barnes’?Karate Kid Part III benefactor, Terry Silver, had made such a big impact on the series.

Fans had long speculated about seeing Barnes again and Jon Hurwitz remarked, ¡°From the beginning, we talked about bringing Mike Barnes in, and it was really about finding the right moment. And what better time than when Terry Silver is reigning supreme over the Valley and his Karate Kid III dreams are being realized?¡±

As for how exactly Mike Barnes comes into the story, Hurwitz noted, ¡°At the end of Season 4, there’s talk of Silver bringing in old friends and we’ll see soon enough if Mike Barnes is one of those friends. For us, the approach of bringing back legacy characters is to give a taste of what you loved about the character but find something new and I think we’ve done that this season with Mike Barnes.”

With Mike Barnes’ return, Sean Kanan becomes the latest Karate Kid movie series alum to return to a role he created decades before. Said Hurwitz, “Sean Kanan was a pleasure to work with. He came in on his game and he was he was ready to kick ass and ready to be funny. The bad boy of karate has become a man and we’ll get to see what kind of man he is.¡±

Season 4 also ended with some big events for Miguel, who discovered the father he never knew was living in Mexico, prompting Miguel to run off looking for him ¨C with Johnny following to keep him safe, whether he likes it or not.

But Johnny is also bringing his son Robby with him, after the two had a moment of reconciliation at the end of last season. Of course, Miguel and Robby have some very heated history, fights included ¨C including a brutal Season 2 showdown that led to Miguel¡¯s temporary loss of the use of his legs ¨C meaning it¡¯s not so easy to get them on the same page, no matter how much Johnny would like it to happen.

As Schlossberg explained, ¡°We know that Johnny is motivated to get his real life son and his top student to mend fences and we know the audience wants to see that happen. But there have been things in the past that are going to be challenging.” In fact, Johnny himself adds to the tension, with?Schlossberg noting, “It’s?incredibly awkward that Johnny is there. Johnny is a part of the awkwardness that’s between the two of them.¡±

That being the case, Schlossberg added, ¡°It¡¯s not just the two of them that need to figure things out. Johnny needs to be a part of that as well. We really wanted to play that out in Season 5 in the most entertaining way possible and in a way that you haven’t seen. We know that Robbie and Miguel have been in fights in the past. Usually it involved Sam or Tory. So you’ll this season how things develop with them and and where it goes.¡±