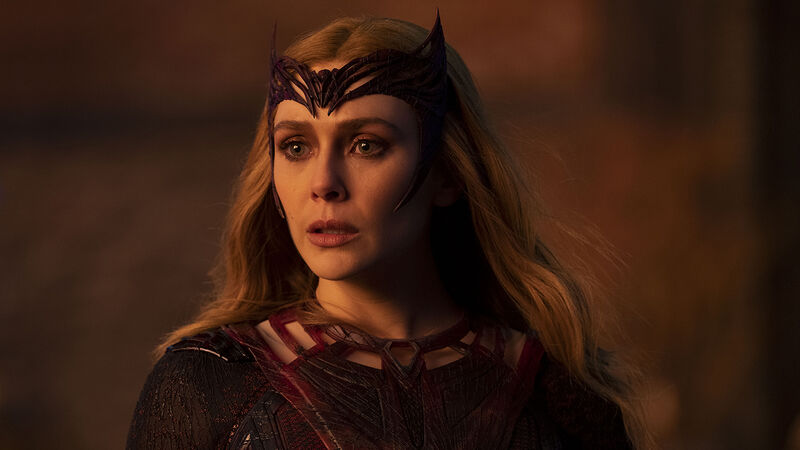 Note: If you haven’t seen Doctor Strange in the Multiverse of Madness, some SPOILERS follow.?

Amongst Danny ElfmanˇŻs incredibly prolific career, the composer, singer, and songwriter has had several notable collaborations with?Sam Raimi, including their work together on the beloved Spider-Man and Spider-Man 2. ElfmanˇŻs also scored other Marvel heroes through his career, including Hulk and Avengers: Age of Ultron, but now he and Raimi have re-teamed in the world of Marvel in a big way for Doctor Strange in the Multiverse of Madness.

Elfman spoke to Fandom about the unique challenges Multiverse offered him, including its blend of superhero story and horror and its specific use of Wanda Maximoff, the Scarlet Witch, along with the opportunity to use some familiar music from other Marvel projects.

Plus, Elfman spoke about his triumphant recent show at Coachalla and if he might do more like it down the roadˇ­

FROM DARKMAN TO SPIDER-MAN
TO STRANGE, MAN

Multiverse of Madness stands out as Raimi and Elfman re-teaming on a Marvel superhero film, but of course the film itself is notable for being the most horror-infused movie the MCU has given us to date – a world Elfman is quite familiar with as well, having scored films like Nightbreed, The Frighteners, and The Wolfman (plus comedy horror films like?Beetlejuice and Dark Shadows).

Asked what it was like to combine horror and superhero elements into his music for the film, Elfman described it as, ˇ°So cool! I really love working in both worlds. The big question I had since the beginning is clearly this is the love child, with the DNA equally, of Sam Raimi and the Marvel Universe, and will Marvel fans permit that? Will they accept it? I kept telling my wife, ˇ°Man, I don’t know… This movie is so weird! I love it but will others understand what it is? And it’s so heartwarming to get the reaction. I went last Friday for the opening with Kevin Feige and the producers and Sam and the editor, driving from theater to theater, and it was so much fun just hearing and feeling audience reactions.ˇ±

Raimi and ElfmanˇŻs most famous collaboration was on Spider-Man but theyˇŻve worked together on many films and their very first team-up, on 1990ˇŻs Darkman, is actually a bit reminiscent to Multiverse of Madness. That film too was a superhero film with some horror elements, and Elfman noted that looking at the path from Darkman to Doctor Strange with Raimi, ˇ°It did feel like I was able to come full circle a bit with Sam. There’s that bit of fun, dark horror that Sam is so brilliant at with the resurrection of Strange as dead Strange. As soon as I saw that, it’s like, ˇ®Oh my God, this is so Army of Darkness, so Darkmanˇ­ˇŻ It’s just got that whole, crazy quality, but at the same time, it’s a movie with a lot of heart.”

As we learn quickly, Doctor StrangeˇŻs bad guy (cleverly hidden in plain sight in the trailers) is the Scarlet Witch herself, Wanda Maximoff. Fueled by grief ¨C and the influence of reading the powerful, corrupting Darkhold ¨C Wanda is determined to travel the multiverse to be reunited with the children she magically created and then lost in WandaVision, Billy?and Tommy, and doesnˇŻt care who she needs to kill in order to do so.

Of course, Wanda had been a hero in previous films and we know the pain that fuels her. Elfman noted she provided a particular challenge musically, explaining, ˇ°Writing for Wanda and her character, sheˇŻs the weirdest antagonist I’ve ever written for. When you think of a Marvel antagonist, you think of Thanos. When you think of a classic villain, you think of Darth Vader and you think of writing these big, heavy, dark themes that play their characters. You don’t think of a woman whose entire purpose is not to possess the universe but just to return to her childrenˇ­ who never quite really existed. It’s crazy! So it really was a writing challenge, because I have to write a theme that can be malevolent, but also, I want it to feel heartbreaking at the same time. SheˇŻs a very unique character.ˇ±

Elfman added, ˇ°Then [there was] writing StrangeˇŻs theme, which also has to convey his lost love for Christine and their almost romantic theme. It was a really challenging, interesting score that really had me on my toes the whole time. And then just getting to drop into pure monster [movie], and go right back to 12 year old Danny Elfman. What a pleasure that was!ˇ±

A couple of scenes in Multiverse of Madness stand out for how ingrained ElfmansˇŻs music is into the onscreen action. One is more straightforward, which is the song another universeˇŻs Tommy and Billy sing to Wanda, pleading for ice cream – a song Elfman wrote for the film.

The other is a more overtly Strange example, which is when Doctor Strange battles an evil version of himself quite literally using music – as the two use instruments around them and the notes they create to fashion magical weapons made of music, blasting each other with powerful spells that are accompanied by appropriately epic ¨C and classically familiar ¨C musical sounds.

Discussing how his work is interwoven into those scenes, Elfman remarked, ˇ°Those were two classic examples that were opposites in the sense that the ice cream song I wrote way in advance, when there was just a script ¨C he hadn’t shot anything ¨C because he needed to have them sing it on the set when he was shooting. Whereas the musical battle was very late in the game, and Sam was returning to England to shoot a second time. He says, ˇ®I’ve got this idea,ˇŻ and he’s describing it to me. And I said, ˇ®Sam, I don’t know what the hell you’re talking about.ˇŻ And he’s like, ˇ®Don’t worry, don’t worry, you’ll see it, you’ll see.ˇŻ And he comes back and I look at it and it’s like, ˇ®Oh, I get it! You were being literal!ˇŻ That was all done after the fact because they’d already shot it. And they were well into creating the effects and I just had to follow it and try to make it feel like they were hearing music, even though they weren’t. There was a lot of experimentation in how that would work.ˇ±

In the case of the musical battle, in the final product, ElfmanˇŻs score would be combined with special effects in a very specific way, and he noted, ˇ°It was a little bit unclear in the sense that I was writing music, knowing that there are areas where there’d be all these effects, but not quite sure. And it was really at the very end of the 11th hour because I’d written something, and at that point, I still had several themes from different composers flying at each other. I got a call from Kevin Feige, with Sam on the line on a Zoom, saying, ˇ®One more pass, Danny. We have 48 hours left in this production. Can you do it? Bach versus Beethoven?ˇŻ And I said, ˇ®Of course! It’s impossible! Yes, I can do it!ˇŻ And then the final version of condensing down to really just Beethoven’s Fifth Symphony coming towards Bach’s ˇ®Toccata and Fugue,ˇŻ returning and condensing it that extra bit. It really just happened at the very, very last second and was dubbed into the movie on the last day of the dub.ˇ±

Michael Giacchino wrote the score for the first Doctor Strange?and Elfman includes Giacchino’s?Strange theme in the new film – though thatˇŻs not the only time we hear music from other Marvel projects in Multiverse of Madness. Said Elfman, ˇ°Marvel likes the Easter eggs and musical Easter eggs and I think it’s a great concept.ˇ±

With Giacchino specifically, itˇŻs not surprising that some of his themes would return, though Elfman was amused by the serendipity of Giacchino scoring Spider-Man: No Way Home?¨C whose use of characters from the Raimi Spider-Man films led to some familiar themes being played ¨C while Elfman was working on Doctor Strange.

Said Elfman, with a chuckle, ˇ°The irony here is that, talk about multiverse crossing each other, almost at the same time, Michael Giacchino is scoring Spider Man and using my original Spider-Man themes, and I’m scoring Doctor Strange using his original Doctor Strange themes. Early on, I kind of defined these three moments where I thought his music would play really well.ˇ±

Multiverse of Madness also includes an appearance by Hayley Atwell, as a ˇ°Captain Carter version of Peggy Carter who evokes Steve Rogers as Cap in many ways and gets the music to underline it, along with the sequence when Wanda is first mentioned (and then seen) and the WandaVision theme is included in the score. For these scenes, Elfman said, ˇ°There was a Captain America moment where it’s like, ˇ®Oh yeah, this will be good.ˇŻ And then the WandaVision moment, even though Wanda had all new thematic material, itˇŻs totally fun to just drop in that one thing. It was important for Kevin and Marvel and I think it was a great idea.ˇ±

Of course, some viewers will have noticed there is one more piece of music from MarvelˇŻs past Elfman sprinkled into Multiverse of MadnessˇŻ score – something a bit more, well, animated in origin. Elfman said he couldn’t speak about that one just yet (ˇ°That’s the one that they still want their fans to findˇ±), referring to it, with a grin, as, ˇ°the mysterious fourth musical easter eggˇ­ˇ±

Elfman is coming off two incredibly well received shows at Coachella last month, in which he did a highly unusual, yet wonderfully successful blend of songs from his days as the lead singer for Oingo Boingo, songs from his 2021 album Big Mess and beloved orchestral tracks from his composing career, including the themes to Batman, Spider-Man, and The Simpsons.

If, like myself, youˇŻre a fan of Oingo Boingo, the Coachella performances stood out because Elfman was performing songs he hadnˇŻt done since 1995, while also reminding everyone of just how iconic his film music has been and how many memorable themes heˇŻs written. The big question now is will he do more shows of this sort beyond Coachella?

Said Elfman, ˇ°It’s possible. I just could not have created a more difficult production to put together. ˇ®Oh, yeah, it only involves 50 musicians on stage and what could be simpler than that?ˇŻ We’re looking at ways to do it, and how to make it work financially and cost effective. You know, it’s so difficult. It was just a concept. I literally just threw a concept at [Goldenvoice CEO] Paul Tollette in 2019, when my manager brought me out to Coachella and I saw these big screens and I got excited. I said, ˇ®How about a crazy mashup? Old [music], new, film all jammed together?ˇŻ And it seemed like a good idea, and then cut to like, two years later and itˇŻs like, ‘Oh my God, what have I done? This is never gonna work.’ˇ±

Elfman said he truly felt heˇŻd set himself up to failure leading up to the show, recalling, ˇ°I was so filled with regret that I ever even attempted it. So I said, ‘It won’t work. it’s going to implode. It’s going to be the biggest disaster of my career in front of the most people.’ And then, somehow it happened. So I hope we get to do it again. But you know, it’s not up to me. A lot of people are talking and let’s see what happens. I might have to do, like, the simpler version. I don’t know. But you know, something somehowˇ­ˇ±

Doctor Strange in the Multiverse of Madness is now playing.