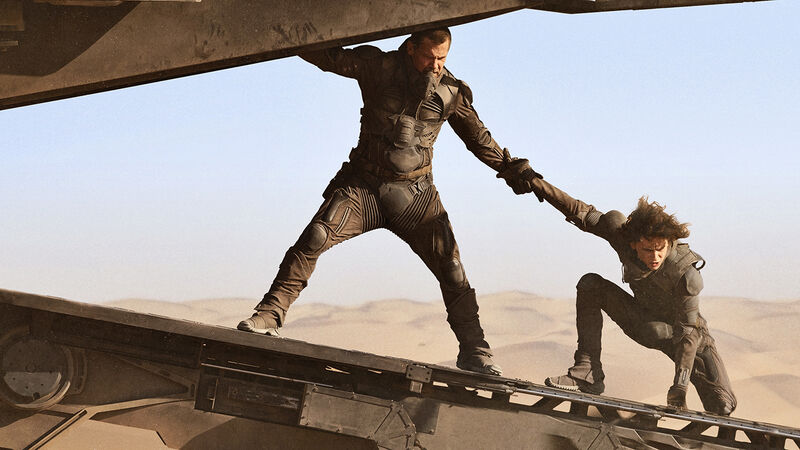 Could the ¡®Dune¡¯ Ornithopter Actually Fly in Real Life?

One of the coolest designs in Denis Villeneuve¡¯s Dune is the dragonfly-inspired ornithopter. Not only do the ornithopters play a crucial role in several important escape scenes, but they also make the most satisfying buzzing noise¡ª a cross between a helicopter and the flapping wings of a giant bug. But, you might be wondering, could such an aircraft really fly in the world outside of science fiction?

We sat down with Vivian Tsui, an Aerospace Engineer who¡¯s worked on in-space propulsion for 5+ years, to talk about the practicalities of ornithopters and whether or not they could exist in the real world. Our conversation started off with a discussion about the differences between the kinds of aircraft that we see on the regular and something like an ornithopter.

¡°The ornithopter uses moving wing flight rather than fixed-wing flight like an airplane. An ornithopter’s flapping wings beat air down to generate lift. Airplane engines provide thrust to move the airplane forward and create airflow over the wings. Airplane wings are shaped so that airflow over the top surface is a lower pressure than the bottom surface. This pressure differential generates lift.¡±

While airplanes generate ¡°lift¡± through the thrust of their engines and then use their wings (and the airflow) to stay up in the air, the ornithopter uses its wings to push air down and propel itself upward.

Interesting! Instead of the wings flapping straight up and down like (let¡¯s be honest) we were all imagining, they¡¯d be shifting angles quickly to slice through the air, cutting down on that pesky drag, and pushing themselves forward.

The ornithopters in Denis Villeneuve¡¯s Dune are based on dragonflies. Are there any real-life examples of aircraft taking design or functional inspiration from actual living things?

¡°Yes, fixed-wing aircraft generally all take design inspiration from birds’ gliding flight. Leonardo Da Vinci designed his ornithopter [he drew up designs in the late 15th century] by studying birds’ wing movements in flight. So maybe the Dune ornithopter would be more appropriately named the odonatapter.¡±

Well, you heard it here folks. Ornithopters are out and odonatapters are in! And for those who didn¡¯t know, which we certainly didn¡¯t, ¡°odonata¡± is the order of flying insects that includes dragonflies!

¡°There have been successful efforts to create machines which fly like insects, so this method of moving wing flight is possible for humans to design and develop. But those machines have all been much smaller than aircraft which can hold humans. There?were large prehistoric insects capable of flight, so this method of flight should be possible to scale up for human flight.¡±

Challenges of Physics and Technology

Then it¡¯s possible for a machine to fly like an insect, but there are probably pretty big challenges to get us there, right? Or else why wouldn¡¯t we constantly be travelling through the air in cute beetle-shaped aircraft?

¡°The challenges?with scaling up are mainly technological. Ornithopter wings have to move incredibly fast, which would require a lot of power. With current power generation and storage technology, that would translate to a lot of weight, which would be counter to the intent to generate lift.¡±

Ah, so the storage for the power needed for an ornithopter to fly would just be too heavy for the aircraft to be practical. Anything else?

¡°Ornithopter wings would need to be able to withstand the large forces that flapping imparts on the wings. The wing material would also need to survive the enormous number of times that force is placed on the wing. There is currently no material that could do so for an ornithopter sized-wing.¡±

Other Planets and a Fatal Design Flaw

Darn. No ornithopters for us at the moment¡ª at least, until we find (or invent) some sort of new material that could handle the force that would be needed for the ornithopter to actually be able to fly. At least¡­ on Earth.

Huh. So maybe ornithopters could work somewhere else at least. Except, Tsui has pointed out one more design issue in Dune¡¯s ornithopters¡­

¡°The set of wings on top and bottom of the ornithopter do not make sense. The bottom set would get destroyed by the force of air coming down from the top set. Physics does not support having parallel stacked wings like that. See also how no birds or insects are like that.¡±

What About the Cost?

Still, let¡¯s ignore the laws of physics for a moment. One huge barrier to us flying around in cool dragonfly-shaped jets would obviously be money. We asked Tsui what the general breakdown of the cost of an ornithopter might be.

¡°The cost to design and develop an ornithopter to the point of reliable human flight would be comparable to creating any new aircraft. Once fully developed, the very specialized materials would likely be a significant cost driver. Then the complexity of assemblies and precision of parts needed would drive the rest of the cost.

The majority of the cost is going to be in developing the wing movement mechanisms and controls and the testing wing materials. The tricky part is that there could be many issues that could arise during that development or after production starts. My WAG [a.k.a. Wild Ass Guess] is $500 billion. But there’s so few numbers to compare to that I could not tell you if that is optimistic or conservative or even remotely accurate.¡±

500 billion dollars is¡­ a lot of money. So even if there were cool dragonfly jets flying around, they probably wouldn¡¯t be for civilian use. Just for the heirs of aristocratic houses then.

Check out our interviews with the cast and director of Dune below.