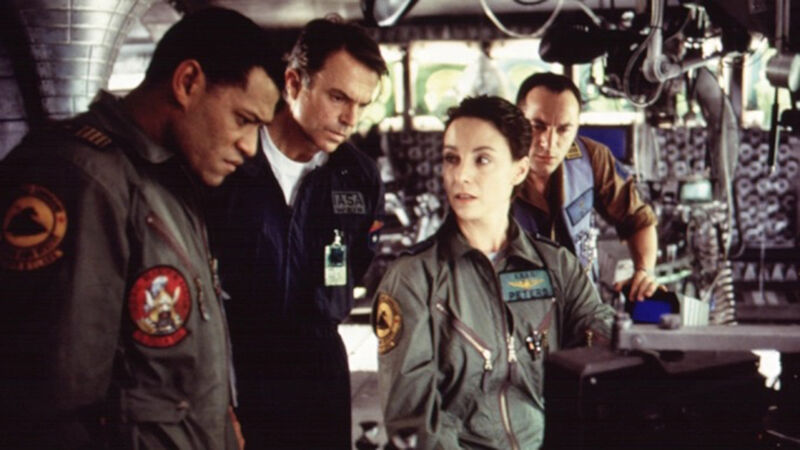 Event Horizon at 25: Director Says of Course he Talks About Making a Sequel

¡°When it came out, it was a kind of rushed release, didn’t have the best advertising campaign, was released at the wrong time of year ¡­ in the middle of the summer,¡± says Paul WS Anderson, director of cult sci-fi horror classic Event Horizon which was first released in cinemas 25 years ago and, incredibly, failed to make an impact. It clawed in $42 million against its $60 million budget. Critics didn¡¯t much warm to it either.

¡°It’s not really a big summer movie,¡± continues Anderson. ¡°[It] was released up against popcorn movies, like Air Force One with Harrison Ford — you know, big feel-good films, and we were definitely a ¡®feel-bad¡¯ film.¡±

Anderson is chatting with Fandom on the occasion of Event Horizon¡¯s 25th anniversary and its recent release on 4K. He¡¯s looking back on the film¡¯s original release, sold with the compelling tagline ¡°Infinite Space, Infinite Terror¡± that also perhaps compounded the struggle it had with being pigeonholed as an Alien/s copycat (it¡¯s not, though there are intriguing thematic similarities).

Lovecraft on the Horizon

The film stars Sam Neill as Dr William Weir, designer of a state-of-the-art ship called the Event Horizon, which was built with an experimental gravity drive at its core allowing it to manipulate space-time. Lost in space following its maiden voyage, the ship mysteriously re-emerges seven years later and Weir is part of a team sent to investigate and recover the vessel and its crew.

The other members of Weir¡¯s crew onboard the rescue ship include Laurence Fishburne as the ship¡¯s captain, Miller; Joely Richardson as Starck, the ship¡¯s communications officer; Jason Isaacs as DJ, the ship¡¯s doctor; Sean Pertwee as the ship¡¯s pilot, Smith; and Kathleen Quinlan as medical technician, Peters. Richard T Jones as rescue technician, Cooper and Jack Noseworthy as chief engineer, Ensign?Justin, round out the crew.

Event Horizon has been reappraised in the ensuing years, initially finding its legs on home video which grew its fanbase, and the film is now critically lauded. About time. Some of us always knew it was stardust — including one high-profile viewer.

¡°I screened the movie for [Kurt Russell] at the time,¡± begins Anderson. Russell was working with Anderson on the director¡¯s follow-up science-fiction actioner, Soldier, reportedly considered to be a ¡°sidequel¡± to Blade Runner by the screenwriter of the 1982 Ridley Scott classic but another project of Anderson¡¯s that at the time failed to set the world alight. ¡°When he came out of it, [Russell] said, ¡®I know you’re disappointed, Paul, but in 20 years’ time, that’s the movie you’re gonna be really glad you made.¡¯ And, goddammit, he was right.¡±

¡°When he came out of it, [Kurt Russell] said, ¡®I know you’re disappointed, Paul, but in 20 years’ time, that’s the movie you’re gonna be really glad you made.¡¯ And, goddammit, he was right.¡±

Anderson readily admits to his disappointment at Event Horizon¡¯s performance and the critical reaction — ¡°It’s not the first of my movies that has been reappraised in that way, but that was early on in my career and it was a big blow to me¡± ¨C but he swears he¡¯s always been ¡°immensely proud¡± of the film.

¡°We worked super hard on it,¡± says Anderson. ¡°And I thought the design of the [ship] Event Horizon, the way that it was shot by Adrian Biddle [was great]. I mean, the performances by Fishburne and Sam Neill — I knew it was a really strong movie.¡±

His experience taught him a valuable lesson.

Why does he think opinion changed about the film?

¡°I think in some ways, the things that might have hurt us in its original theatrical release — like the ambiguity of the ending; the ambiguity of what really is the Hell Dimension; the fact that we don’t tie everything up in a very neat bow — those are things that I think audiences and critics maybe didn’t like at the time. But I think those are the things that have sustained the movie over time, because that ambiguity has actually caused people to talk about it. And I think that has given it a longevity that it might not have had otherwise. It’s just a reminder it doesn’t really matter what happens on the opening weekend. The race is a long one, and it’s nice to see something that gets appreciated over time.¡±

And it¡¯s the film¡¯s ambiguity that has deterred him ¨C and still does ¨C from making a sequel, or even a prequel. The last heard of any such follow-up was a Prime Video TV series in production, without Anderson¡¯s involvement but with horror director Adam Wingard involved alongside producers of the original film. But that was back in 2019 and there¡¯s been little news of it since.

Anderson does, however, reveal that ¡°of course¡± he¡¯s thought about making a sequel over the years, and what it would be like, and then he present-tenses that ¡°we talk about it on and off.¡±

¡°But I’ve always been very nervous about returning to the world of Event Horizon,¡± he adds. ¡°For the reasons that we’ve talked about. I think the ambiguity of it gives it its power. And what are you going to do with the sequel, other than defuse that ambiguity? And maybe hurt the original film? So, on the one hand, it’s an attractive idea to talk about ¡­ [but] I think sometimes things are better left alone. Not everything requires a sequel. That’s not Hollywood thinking. But, I know sometimes things are better left.¡±

How Could Hell Be Any Worse?

It’s difficult to imagine that the calls for more from fan quarters will ever die down ¨C largely due to the devilish thirst for more from the Hell Dimension. Plenty of footage of the hellscape was shot by Anderson ¨C and during the subliminal-like flashes of imagery that made the final version you¡¯re able to piece together a truly horrifying scenario — that ended up not being used, or cut out. Much of this made Anderson¡¯s original cut of the film but was axed because of the reaction of studio bosses. Anderson maintains that the additional footage will never see the light of day despite pleas for a director¡¯s cut because it exists in unsalvageably bad VHS quality. But it exists¡­

¡°I mean, there is more material, but it is all VHS so it’s not the kind of quality of footage that you could reintegrate into the film to do a special edition of the film,¡± Anderson says.

“One of the [studio execs] actually said to me, ¡®But we’re the studio that makes Star Trek¡¯, as though somehow I was damaging Star Trek by making this dreadful Outerspace movie that had all these impalings and people ripping out their eyeballs.”

The director recalls the infamously bumpy post-production process, in which the usual 14-15 weeks in which to edit the film was cut to four ¨C with one week of that dedicated to final second-unit directing responsibilities.

¡°It was a very compacted post-production, which meant it was pretty unpleasant. But I actually think the movie that came out at the end of that process is a really good movie.¡±

He¡¯s talking about the version that included more of the Hell Dimension footage.

¡°The studio was genuinely horrified by the look of the film and the visions of Hell,¡± Anderson recalls.

Why were they so taken aback?

¡°They clearly hadn’t seen any of it before,¡± explains Anderson. ¡°You know, they always claim they’re watching your dailies: ¡®Oh, the movie looks great¡¯. But they were dealing with Titanic and James Cameron and I get it. They had big fish to fry. So they kind of left us alone. But then on that first test screening on the Paramount lot where the studio executives came out, they were stunned — in a bad way. And one of them actually said to me, ¡®But we’re the studio that makes Star Trek¡¯, as though somehow I was damaging Star Trek by making this dreadful Outerspace movie that had all these impalings and people ripping out their eyeballs.”

The Power of the Imagination

But while the studio insisted on ¨C or ¡°advocated for¡± to use Anderson¡¯s words ¨C reducing the amount of horror footage, the director claims he didn¡¯t actually take a huge amount out.

¡°What I did was, I compressed editorially what was in there. And it led to these bursts,¡± says Anderson. ¡°So now there were only five seconds of horror. But damn, there was a lot of horror crammed into that five seconds, you know? You had these bursts, these visions of Hell that actually because of their shortness became incredibly powerful. And it really was a lesson to me as a young filmmaker that less sometimes is more.¡±

¡°I can’t tell you how many people have come up to me over the years, and said, ¡®Oh, my god, your movie — it was just so dreadful. That one image where you…¡¯ and then they go on to describe something that I just never shot.”

And if you¡¯ve ever known your imagination to play tricks on you, or even concoct terrifying nightmares, you¡¯ll understand the power of suggestion and the idea that there¡¯s nothing to rival anything your own mind can create.

¡°I can’t tell you how many people have come up to me over the years, and said, ¡®Oh, my god, your movie — it was just so dreadful. That one image where you…¡¯ and then they go on to describe something that I just never shot. I know what they’re talking about is not in the movie. But it’s that moment where they look away. And they imagine it and they insert their own imagination. Of course, nothing scares you more than your own imagination, and that’s the whole theme of Event Horizon as well — these people are being haunted by their own nightmares. So, I think the brevity of the horror has given the movie a power that it wouldn’t otherwise have. I don’t think that was Paramount’s intention when they gave those notes. But that’s how it ended up. And I think that’s a good thing.¡±

He makes a solid point ¨C and one it¡¯s difficult not to agree with. But, dayum, we¡¯d love to see that footage¡­ With a sequel not entirely out of the question and advances in technology one day perhaps making the restoration of that VHS footage possible, this Event Horizon fan is going to continue to salivate at the prospect.

Event Horizon is available to buy now on 4K.

If you liked this article, you might like our chat with John Carpenter, who discusses the reappraisal of Escape From LA, starring Kurt Russell, and a possible sequel to another Kurt Russell film — and Carpenter classic — The Thing, below.