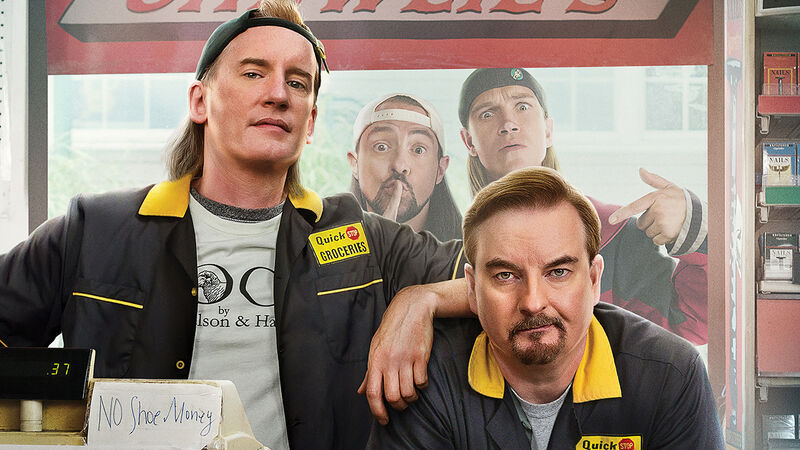 Clerks III may make you cry, which is not exactly what you might expect from a Clerks movie. The third film in the Kevin Smith series ¨C itself a part of his larger View Askewniverse ¨C revisits Dante Hicks (Brian O’Halloran) and Randal Graves (Jeff Anderson) again, now nearly 30 years after we first met them in the 1994 cult hit that made Smith a breakout Gen X success story. But this time, things get notably heavier and more emotional than in the past.

The set-up, with Randal having a heart attack, is based on Smith¡¯s own near death experience with a similar ¡°widowmaker¡± heart attack a few years ago. In Randal¡¯s case, his brush with death inspires him to make a movie about life working at the Quick Stop convenience store – to make, well, Clerks, as the series comes full circle in more ways than one.

Speaking to Fandom about the film, Smith addressed previous comments he¡¯d made about how a very different version he¡¯d first written of Clerks III, before his heart attack, was in some ways more of a downer, noting, ¡°The first iteration of Clerks III that I wrote was written by a guy who is obsessed with death but had never even really tasted it.¡± In that version. Hurricane Sandy destroyed the Quick Stop, and Randal ¡°had a nervous breakdown of sorts,¡± in Smith¡¯s words, leading him to decide to stand in line for a movie a year before it opened, despite there not being any reason to do so in our reserved seat era.

As Smith described it, ¡°Then a line built up around him and a village of people built up around and he became the unofficial mayor of this village. And he built like a lean to version of Quick Stop and kind of tried to replicate his life. It was a movie about dealing with grief and kind of survivor syndrome or something like that. But again, written by a guy who hadn’t gone through anything.¡±

Looking back at the series, Smith said a key ingredient was putting his own experiences into it, acknowledging that is something 2006¡¯s Clerks II was lacking in some respects. ¡°Clerks reeks of authenticity because I lived that life. I worked at the store. And when we weren’t f**king shooting the movie, I was actually working behind the counter. Clerks II, I love that movie to death, but when I look at it, I¡¯m like, well, that’s artifice. I never worked at a fast food joint. I’ve never been to a donkey show or anything like that. It¡¯s more of a classical movie structure. For this, though, I felt like I can’t do the authenticity of what it’s like to be in the retail trenches again, but I can lend it the authenticity of my real life. That’s all Clerks is to me. When I watch Clerks, it’s like, well, that’s just a biopic of how I lived at the time. So if I’m making a Clerks III, and following that recipe, then I should take from what I do in life now.¡±

ONCE MORE WITH FEELING

Elaborating on how Clerks III became truly personal, Smith said, ¡°The heart attack storyline led me to the movie because I was like, ¡®Well, how would Randal react? And how would he feel after he came out of this?¡¯ And then I was like, ‘He might want to make a movie.’ And then suddenly, I had another strong pillar of authenticity. That happened. That literally happened. I could give them my experience, just like I gave Dante and Randal my experiences on the first movie.¡±

Regarding the previous films and expanding into more dramatic aspects, Smith noted, ¡°The boys always fight in the third act and have come to Jesus kind of moment and stuff. But this is just me leaning into like the prison scene in Clerks II or the third act fight scene of the previous two movies, where you play with the drama a lot more.¡±

Jeff Anderson felt the progression made sense, telling Fandom, ¡°They’ve sort of been building this way. The first one, not very emotional. The second one, we kind of got into it. And the third one, we’re fully there with tears, the whole works. I think it’s just we’re following where these guys are through their life. And in this story, it’s about being in your 50s and realizing you’ve done nothing with yourself and that in itself sort of evokes emotion. So this is sort of a natural transition, I think.¡±

Brian O’Halloran agreed, saying he felt?Clerks III reflects, ¡°The period in someone’s life, especially getting in their 50s, where sometimes life can throw you some curveballs that can kind of question your mortality, like, ¡®Oh God, I’m not invincible. I’m susceptible to certain things.¡¯ And so I think this encapsulates that, just like Kevin and emulating his own real life and going through his health scare, and gets to that point. And I think the fans, especially who followed us from 1994 until this point, will see this tremendous arc of all these characters.¡±

Smith also felt this was the right move thanks to his leading men and how they’d evolved, saying, ¡°Brian and Jeff are older now and wonderful actors and they can handle it. If I had given them this stuff in the first Clerks, it wouldn’t play. But now with gravitas and age and experience, it¡¯s like, oh, not only can they make you laugh but they can rock you with a monologue that will break your heart and make you cry.¡±

Observed Smith, ¡°You know, you get old enough and you’re like, ¡®I think I know how to make them laugh.¡¯ Whether you think I’m funny or not, some people do, and I certainly know which buttons to push to evoke a reaction I’m looking for positively in the manner of laughter. Then you become interested in, ¡®Well, what other buttons can I push? Can I make them feel? Can I make them cry? That’s even more powerful than laughing!¡¯ And then you start layering that into the work.¡±

A big part of Clerks III is seeing the characters make their movie and, simultaneously for the audience, recreate scenes from the first Clerks, as Dante, Randal, Jay (Jason Mewes), and Silent Bob (Smith) play themselves and recruit locals to do the same – leading to many familiar faces from that first movie returning, including Marilyn Ghigliotti as Veronica Loughran, Dante¡¯s girlfriend in Clerks.

Asked what it was like to recreate scenes from that first movie decades later, Smith replied, ¡°It was so fun. I designed it that way and couldn’t wait till we got to set to do it.¡± He added that writing the film, he pondered, ¡°Is it gonna be a mind trip for everybody else? They’re gonna see life the way I do, through a stoned perspective. It¡¯s like, oh my Lord, we were doing this 29 years ago, in the same spot, saying almost the same thing. It was a blast.¡±

Smith added that in the age of streaming, they were able to constantly bring up Clerks on their iPhones ¨C it was available on HBO Max during production ¨C to make sure they were mimicking shots correctly. ¡°The frames that we were trying to mimic, the composition, we’d pause it and then we’d hang it right next to the camera¡­ We¡¯d be like, ¡®Brian, can you move over just a half minute stay? Alright, now move the drink. And bam, alright, we¡¯re there people. Act.¡¯¡±

One notable sequence has Jay recreating the scene where he and Silent Bob dance in Clerks for Randal’s film, only to become uncharacteristically shy and nervous. Jason Mewes said this was based on how he felt actually making the first film, remarking, ¡°It’s so weird to think back now, especially while we were shooting that scene [for Clerks III], because I wasn’t nervous at all. Well, I guess I was nervous about making sure I choreographed and danced the same way to make sure I hit that same sort of dance off. But it¡¯s just such a difference, because I really was that [nervous] when we first filmed. I was genuinely super scared. My body would be shaking.¡±

Just as Jay wants no one watching when he films the scene, Mewes recalled asking those working on the film, ¡°¡®’Come on man, can everyone go inside?’ and it really was only like five people¡­ It¡¯s true, exactly how we portrayed it was how I felt and it took a while to get over that.¡±

When it came to those recreations from the first movie, Smith said, ¡°Jason Mewes took it the most seriously. If you look at his dance sequence, like when we dance outside, finally, it’s pitch perfect. He literally does the exact same moves beat for beat man. So it was nice to be able to replicate and trippy as hell. And part of the fun of making it and we knew that if it was fun on set, it might translate for the audience.¡±

Anderson described recreating the sequences from Clerks as ¡°A very surreal thing. You know, if you would have told us however many years ago, that A, we’d make Clerks and it would become something, but B, if you would say ¡®30 years later, you’re going to be doing it and recreating literally the same movie,¡¯ I would have never thought that would happen.¡± Said O’Halloran, ¡°I think the fans will get the tongue in cheek kind of meta play that we put on this.¡±