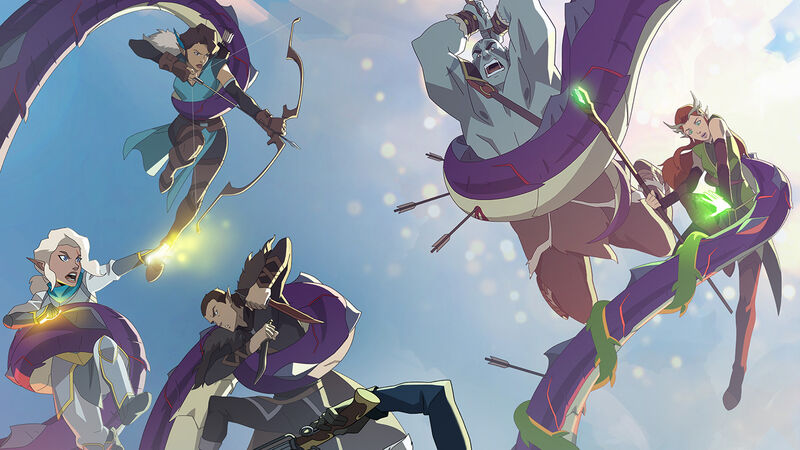 The Legend of Vox Machina?is an animated TV show on Prime Video that is based on a wildly popular Dungeons & Dragons campaign played by the cast of Critical Role. Talented and known voice actors helm Critical Role, and their livestream D&D campaigns have helped push the tabletop roleplaying game into the mainstream.

The Legend of Vox Machina is the product of a Kickstarter campaign that is one of the most well and quickly funded projects in the crowdfunding site’s history. In fact, the Kickstarter passed its initial funding goal within one hour of going live, and all initial stretch goals were unlocked within the same day.

Here’s a closer look at Critical Role, its animated series, and how you can jump into the most popular tabletop RPG yourself.

What is Critical Role?

The group has numerous accolades and recognizable roles. Riegel voiced Donatello in the Teenage Mutant Ninja Turtles cartoon series and won a voice directing award for the animated show Danger and Eggs. Johnson and Bailey have won awards for their roles in the video games The Last of Us and The Last of Us Part II as Ellie and Abby, respectively. O’Brien has voiced numerous characters in dubbed anime shows, including Gaara from Naruto. And Mercer is known for voicing Cole Cassidy from Overwatch.

Since Critical Role kicked off in 2015, it’s seen astronomical growth. The first episode of their third and most recent campaign, which aired late October 2021, has 2.1 million views on Twitch and 4.4 million views on YouTube as of press time.

The group streams their games on Twitch and YouTube nearly every Thursday at 7 p.m. PT, with each broadcast running for roughly 3 to 4 hours.

The origins of Critical Role

Critical Role began as a side project for Geek and Sundry, a YouTube and Twitch multimedia production company highlighting all things geeky and awesome. The show rapidly grew to be the company’s most watched program. The entirety of the first Critical Role campaign, which follows the adventures of a group known as Vox Machina across 115 episodes, was streamed under the Geek and Sundry brand. It’s this campaign that The Legend of Vox Machina is based off of.

Part way through Critical Role’s second campaign, the group split from Geek and Sundry to form its own company also known as Critical Role. The burgeoning company has since launched its own merchandise and developed other shows. In all, Critical Role offers over 1,000 hours of viewable, free-to-watch content.

The Critical Role show has had a tremendous impact on Dungeons and Dragons and tabletop gaming as a whole, and it’s not hard to see why. Mercer crafts beautiful worlds full of interesting challenges and diverse characters, and his players bring together a cast of complex characters to the table. The show’s heavier moments are balanced by lighthearted fun and jokes. In short, Critical Role exemplifies the power of D&D as an improv, storytelling tool.

If Critical Role has inspired you to jump into D&D, all you need is a group of friends, a time to meet up in person or online, some dice, and the basic rules. Unfortunately, I can’t provide you with friends or time. Luckily, D&D Beyond has you covered for the other stuff. The official toolset has the basic rules for free, as well as a character builder and digital character sheets from which you can roll dice. (You can sign up for an account here.)

D&D is a game that’s all about storytelling, improv, and antics. Your typical game has a Dungeon Master and a group of players. The Dungeon Master’s responsibilities involve preparing locations, events, and scenarios for each game session, and running the world for the player characters. The Dungeon Master is often the most familiar with the rules, though you don’t need to memorize D&D’s entire rules compendium to get started. You don’t even need to write an adventure for your players from scratch.

There are numerous books with prebuilt adventures that can be run, with non-player characters, settings, monsters, and treasures to be found. These make it easier to run a game. The players, meanwhile, only need to create their own characters—and maybe have a silly voice prepared.

You can play the game entirely for free. There are even free adventure modules for any upstart group. However, if you have more than a passing interest in the game, I highly recommend picking up a few sourcebooks. All of the books are available digitally on D&D Beyond, and work with its suite of online tools. If you’re a hardcover nerd like me, most of the books can be found at your local game store.

Here are the books I recommend for those new to the game:

You can catch The Legend of Vox Machina on Prime Video. The first batch of three episodes released on Friday, January 28, 2022, and more episodes will drop each Friday for the following three weeks.