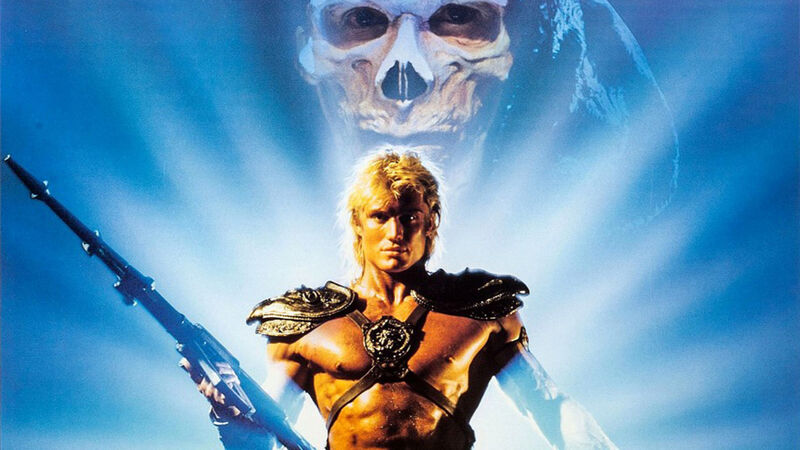 Masters of the Universe at 35: A Weird and Wonderful History

¡°I look back at it very fondly. I know there has been some speculation in the press that I didn¡¯t like it ¨C maybe I said that when I was 32 or something ¨C but I do have huge fondness for it.¡± So said Dolph Lundgren about 1987 box-office-bomb-turned-cult-classic Masters of the Universe in a Fandom interview in 2018. The hulking, super-smart Swedish actor played He-Man, in his first starring role.

The film could, and maybe should, have been a gigantic success at the box office. All of the elements were there. ¡°The Star Wars of the ’80s,¡± proclaimed the posters confidently, hoping to ride on the coattails of the new age of blockbusters emerging that was set to change Hollywood forever. Superheroes, or heroes in all shapes and sizes, were becoming hot properties for studios after the success of Star Wars, Indiana Jones, and Superman, to name a few nascent franchises, setting the stage for Tim Burton’s seismic?Batman in 1989 — the pivotal release that changed the game irrevocably.

During those intervening years, many studios were starting to look at comic books and cartoons — fantastic, popular stories that could translate to the big screen and came with a built-in fanbase — for their inspiration for the next big blockbuster to put bums on seats. At toy company Mattel, plans were already in place to find a home for a big-screen adaptation of their toy line, Masters of the Universe, featuring He-Man, Skeletor, and the other warriors locked in battle on the fictional planet of Eternia.

Fire up the Cannon

Enter Cannon. Up until then, Cannon Film’s slate bore little resemblance to the movies they were trying to make. The small independent company, established in the late 1960s, was bought out in 1979 by Menahem Golan and Yoram Globus, two Israeli cousins who had made it big in their home country and had visions of conquering Hollywood.

They certainly had big dreams but their slate of films ¨C including a cluster of Chuck Norris and Charles Bronson flicks, three ninja films (“The Ninja Trilogy” sparked a global ninja craze), and breakdance movie?Breakin’ and its sequel ¨C weren¡¯t making them as many ‘friends’ as they would have liked and so they decided they needed to go bigger. They bought the rights to make Superman IV: The Quest for Peace; secured the services of Sylvester Stallone for Over The Top for a cool $15 million (maybe more), and persuaded Mattel to sign a deal to allow them to make Masters of the Universe. 1987, it seemed, would be ¡°The Year of Cannon¡±. They were half right.

¡°The fact that most people don¡¯t know is that when we started this picture ¨C I didn¡¯t know but I found out very quickly ¨C we had a studio that was going out of business and a toy company that had just lost $400 million on the ¡°He-Man¡± toyline¡­ so we had two very desperate entities hoping that Masters was going to solve all of their problems,¡± Gary Goddard, director of Masters of the Universe, has said.

In 1986, Mattel was riding the wave of the enormous success of the Masters of the Universe toyline that had crested with the release of the Filmation cartoon series. The show had been been a phenomenon thanks to its groundbreaking syndication deals that saw it sold all over the world. The natural progression, bigwigs at Mattell felt, was to explore the possibility of making a live-action version and they went about pitching the film to Hollywood studios.

Universal Pictures was interested, as was Cannon, and it was the latter who won out with a deal that would see a feature film go into production ready for a summer 1987 release, with both studios stumping up half of the eventual $22 million budget. This was pretty sizeable for the late 1980s, though there were multiple changes during production, including the choice to set most of the action on Earth — the thinking being that Eternia was just too difficult to realise on screen back then.

¡°They could almost smell the money, they could almost taste the success,¡± said the film¡¯s production designer William Stout about Cannon when they secured the rights and saw the opportunity to climb the Hollywood ladder and begin to compete with the big studios, the likes of which they aspired to. Later that year, Cannon announced the film officially with Dolph Lundgren, fresh from his success in Rocky IV, in the lead role of He-Man. In typical fashion, they quickly released a teaser trailer for their worldwide distributors.

Look close enough, and block out its history and contemporaneous naysayers, and there are joys to glean from Masters of the Universe.?Its cult following, built over the decades, has already realised this. But let’s start with Frank Langella¡¯s exceptional performance as Skeletor which carries the film.

When Goddard first took on directing duties, he wanted to restructure the script so that it was skewed more from Skeletor¡¯s perspective. This was once he had secured Langella ¨C who the director actively pursued for the role. He wanted the character to do the film’s heavy lifting (¡°He¡¯s the villain, he¡¯s pulling the strings,¡± said Goddard). It would also help allay the doubts over Lundgren¡¯s abilities as a performer, which became an early concern for Mattel.

The Swede only had two acting credits to his name by 1986 ¨C the aforementioned Rocky sequel (as the inimitable Ivan Drago) and a small role as a henchman in A View To A Kill ¨C and while he certainly had the physicality and build to play the most powerful man in the universe, the toy company wasn¡¯t initially impressed.

¡°I saw the rough cuts and listened to Dolph¡¯s voice and I just about had a heart attack! I wanted them to re-dub his voice and have someone else speak for him,¡± remembers Paul Cleveland, a marketing executive at Mattel at the time. Indeed, director Goddard said they did, in fact, consider that: ¡°We did loops as a test to show the studio, one of them was flawless and to this day I wish we had done it but Menaham (Golan) said, ‘Nope, we¡¯re going with Dolph’, and it was ultimately their call.”

Still, with celebrated stage and Dracula star Langella signed, the team knew that the actor was going to produce something spectacular to raise the game, even with the slightly dodgy make-up.

Co-writer Stephen Tolkin said about the designs: ¡°The solution that Cannon came up with was to paint a skeleton on Frank Langella¡¯s face that looked like a Halloween costume that a mother made for her child!¡± but Goddard needed something that would allow Langella¡¯s performance to come through and it worked well enough.

Incorporating lines from various sources to help bring authenticity to the character and making sure Skeletor¡¯s look ¨C his cloak, his hood, his staff ¨C was as pitch-perfect as it could be resulted in one of cinema¡¯s most underrated villain turns that¡¯s as powerful as it is scary. ¡°I think it¡¯s one of my best performances, I loved doing it,¡± said Langella to Vanity Fair in 2020. Instead, it got lost amid a somewhat muddled movie.

As production was drawing to a close, Cannon¡¯s financial issues started to rear their ugly head and begin to affect their extensive slate of films. Towards the end of 1986, their woes were newsworthy with the company losing over $90 million for the years 1985/86 just as they had begun to try to compete with the studio system by greenlighting their three big-budget so-called blockbusters.

Over The Top, released in February 1987, turned out to be one of Stallone¡¯s lowest-grossing films, whilst the $30 million budget for Superman IV was almost halved to $17 million during production as money dried up. To further complicate matters, production was shut down on Masters with people walking in front of cameras holding cards telling everyone ¡°you¡¯re done¡± which left the climactic battle on Eternia between He-Man and Skeletor unfinished and without an ending.

Cannon told Goddard that ¡°they will fight and we¡¯ll fade out¡± in response to this, but eventually allowed the filmmaker to finish the film ¨C albeit in a very rushed manner. ¡°I¡¯m just glad we had a beginning, middle, and end as at one point it looked like we wouldn¡¯t have the end,¡± William Stout recalls.

A Flawed But Enduring Fantasy

Eventually, the film was finished and after some changes ¨C including the original ¡°Wizard of Oz¡± ending being cut down ¨C the film was released in US cinemas on August 7th, 1987 and despite its best efforts, it flopped. Opening third in the box office charts behind James Bond adventure?The Living Daylights and Richard Dreyfus-Emilio Estevez buddy cop comedy?Stakeout, it would lose its audience pretty quickly and topped out at $17.3million, well under its budget and marketing costs.

It enjoyed some success overseas, with the UK serving it well, and reportedly became one of 1988¡¯s top-rented videos. Ultimately, the film that two flagging studios hoped would save their skins only helped decimate them further. Even a planned sequel, set to be made by director Albert Pyun back-to-back with a live-action Spider-Man film, was scrapped and turned into 1989¡¯s sci-fi actioner Cyborg using costumes and sets already designed. Later that year, Golan and Globus went their separate ways.

¡°Many people over the years have said ¡®How could you do that?!¡¯ with a great deal of superiority and I would say I think it¡¯s one of my best performances. I loved doing it. Over the years it has become a great camp movie,¡± said Frank Langella in the Vanity Fair interview.

Despite its critical and commercial failure, Masters of the Universe has endured. Like many ’80s films of its kind ¨C think fantasy fare such as?Labyrinth, Willow, Flash Gordon, Big Trouble in Little China, Ladyhawke ¨C the film has continued to find fans all over the world, and with this year marking its 35th anniversary, as well as the 40th for the brand, it is still held in much higher regard than it is perhaps remembered for. Whether for Langella¡¯s performance, Stout¡¯s stunning production design, Bill Conti¡¯s wondrous score, or the fact that The Sorceress (Christina Pickles) ended up playing Courtney Cox¡¯s/Monica¡¯s mum on Friends, its effervescent, exciting, rollercoaster of action, emotion, and sci-fi extravagance more than make up for its notable flaws.

The Lost City directors Aaron and Adam Nee are the latest in a long line of filmmakers to have a crack at a new version of the characters for the big screen. They’re closer than ever before to bringing it to fruition, with Netflix set to be its new home after the success of recent associated animated titles on the streaming platform. West Side Story star Kyle Allen is set to take on the He-Man mantle. We’re excited for it but there’s little doubt it’s going to need a good journey to outgun this reappraised 1980s classic.

Where not otherwise attributed, quotes in this article are taken from the Making of Masters of the Universe documentary linked in the main body.?

Check out Dolph Lundgren talking about his experience making Masters of the Universe in our exclusive interview below.