Warning: Cannot modify header information - headers already sent by (output started at /www/wwwroot/cnbluebeat.com/index.php:1) in /www/wwwroot/cnbluebeat.com/inc/common.inc.php on line 2
 Namor Could be the Next Big Step in the MCUˇŻs Road Towards the X-Men | Fandom
Games
Anime
Movies
TV
Video
Wikis
Start a Wiki
Register
Don't have an account?
Sign In 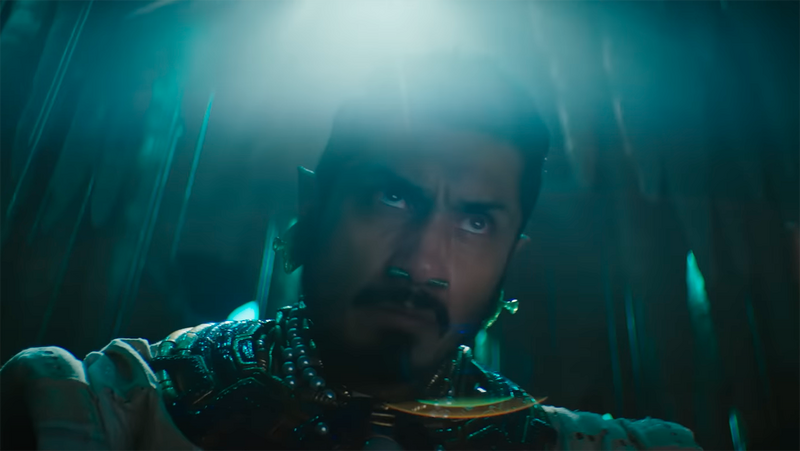 UPDATE (9/26/2022): According to Tenoch Huerta (via Empire), Namor is indeed a mutant in the MCU. Read on for what we speculated that could mean for the MCU.?

Marvel Studios released the proverbial floodgates at San Diego Comic-Con 2022 with a variety of announcements and teaser trailer reveals taking us through?Phase Four, Phase Five and Phase Six! However, the confirmation of one characterˇŻs debut may point to an even larger development for the Marvel Cinematic Universe moving forward.

In the trailer for Black Panther: Wakanda Forever, Marvel revealed a few different looks at the first-ever live-action version of one of the comic companyˇŻs oldest characters: Namor, the Sub-Mariner. ThereˇŻs a glimpse of him as a baby, complete with winged ankles, seen underwater, as well as the grown version played by Tenoch Huerta.

In the trailer it certainly seems like Namor’s people and Wakanda go to war, though NamorˇŻs true intentions in the film remains a mystery for now. Still, the Sub-Mariner’s mere presence does have fans of the source material wondering if this is another notable move towards fully integrating an entire other aspect of Marvel previously contained to a separate cinematic universe into these films and accompanying series.

Let’s look at why Namor could be the next big step in bringing in Mutants — and eventually the X-Men — into the MCU, along with all the groundwork laid for them so far.

A Mutant Before We Knew Mutants

Originally debuting way back in 1939ˇŻs Motion Pictures Funnies Weekly #1 — the very first comic book from Marvel’s original incarnation as Timely Comics — Namor would go on to star in Marvel Mystery Comics as well as his own series. He also appeared alongside Captain America and the android, original Human Torch in All Winners Squad– with later stories putting the three of them on a World War II-era team together, the Invaders.

Super-strong and able to survive both underwater and on the surface, unlike his fellow water breathing Atlanteans, and gifted with the ability to fly — another trait his people did not share — the prince initially traveled to dry land to gain information on what his people saw as their enemies; essentially all of those living on the surface. However, the hotheaded Namor eventually got involved fighting the Axis powers during World War II, understanding the threat they posed to the entire planet.

And then, nothing. Like a lot of the heroes from that era, Namor fell to the wayside as other genres proved more popular. However, when Stan Lee and Jack Kirby began building what is now considered the Marvel Universe, they brought in a few characters from the old days. In 1962ˇŻs Fantastic Four #4,?the new Human Torch, Johnny Storm, discovered an amnesiac Namor living on the surface. Soon his memories returned – and with them, his conflicted nature as both an enemy or ally of the surface people.

What does any of this have to do with mutants, though? Especially since the concept wasn’t even introduced into Marvel until the 1960s, when the X-Men made their debut, long after Namor’s introduction? Great question!

Going back to X-Men #6 (1964), Professor Xavier began wondering if the recently returned Sub-Mariner might be a mutant. As did Magneto, who asked the temperamental ruler to join his team of so-called?Evil Mutants, though the offer was declined. it would take years, but this theory would in fact eventually turn out to be true, with NamorˇŻs ability to fly and breathe air eventually attributed to him being one of the first mutants, on top of being a hybrid (his mother was an Atlantean princess, his father a human).

Namor would eventually align himself more firmly with mutant causes and even at last join the X-Men. All of which is to say, his presence in Wakanda Forever just might be a lead-in for more mutants and other familiar faces. Especially if we get any scientific research done on his genetic code during the film and learn that mutation is why he has such amazing abilities beyond the rest of his people.

Because recent events mean that if his MCU counterpart is identified as a mutant, Namor will be the second character to represent that group…

In the Marvel comic universe, mutants have been a major part of the proceedings since we met the X-Men?in 1963. That is not the case with the MCU, though, because 20th Century Fox held the film rights for those characters (and the Marvel concept of mutants) and developed its own franchise that grew to include not just several X-Men films, but solo Wolverine flicks, two Deadpool films and The New Mutants. However, with DisneyˇŻs recent purchase of 20th leading to X-Men and mutants now being on the table, many have been wondering how and when mutants, and the X-Men themselves, would be integrated into the ever-expanding MCU.

In Doctor Strange in the Multiverse of Madness, Patrick Stewart appeared as Professor X from a reality dubbed Earth-838, as part of the ill-fated?Illuminati. This marked the first official appearance of a mutant in an MCU project, but?with the notable caveat that he was from a different universe than the one we’ve been following since Iron Man‘s release in 2008.

However, when it comes to the central universe of the MCU, the first confirmed mutant has now also debuted via the title character in?Ms. Marvel. While the character in the comics is actually an Inhuman instead of a mutant, the script was flipped at the end of Ms. Marvel‘s last episode, ˇ°No Normal.ˇ± In that episode, Kamala Khan‘s friend?Bruno?explains?that he found a “mutation” in her genetic code. And just in case anyone had any doubts to what this meant about Kamala, the musical sting that accompanied this big reveal came straight from the 1990s X-Men animated series!

And with that, mutants were truly here. Unless they already were?

As the number of mutant characters in the MCU grows, donˇŻt be surprised if some people weˇŻve already seen on screen turn out to be part of the club.?The alteration of Ms. MarvelˇŻs origins indicate that just about anyone could come into the MCU as a mutant. However, there have been a few appearances of already-introduced characters that nod back to the comic book mutant population.

When Scarlet Witch and Quicksilver made their debuts in Avengers: Age of Ultron, many wondered how they would reflect their comic counterparts, who traditionally had been identified as mutants, given Marvel Studios couldn’t use that term at the time. As we learned, the Sokovian twins were the only survivors of a group exposed to the Mind Stone by way of LokiˇŻs Scepter. They did not just live through the experiment, though, they gained powers. It wasn’t stated back then (and legally couldn’t be), but could the twins owe their survival and ensuing superpowers to an unknown genetic mutation? Seems possible!

In the comics, Ursa Major is a Russian mutant who can transform into a bear. His film version appeared in human form as a prisoner in Black Widow. That prison was buried in an avalanche in that film and, hey, maybe thatˇŻs the kind of stress that would trigger a latent mutant power?

If you expand the net to some of the older Marvel Television-produced shows, whose ties to the MCU have yet to be completely solidified (now that Kevin Feige?and Marvel Studios have taken control of all Marvel TV productions), there are even more potential mutants to bring into the fold.

Both lead characters from the Freeform series Cloak & Dagger are mutants in the comics, as is Molly from Hulu’s?Runaways. Their return, much less them being identified as mutants, seemed unlikely in the past, but after seeing Inhumans‘?Anson Mount as the Illuminati’s version of?Black Bolt in the Doctor Strange sequel, following the return of Charlie Cox as Matt Murdock/Daredevil and Vincent D’Onofrio as Wilson Fisk/Kingpin — both now set for the Disney+ Daredevil: Born Again series — anything seems possible these days!

With the MCU mutant momentum picking up post-Ms. Marvel, it seems like NamorˇŻs appearance in Wakanda Forever will continue that trajectory right on into the full establishment of the X-Men and their ilk in the eventual future.