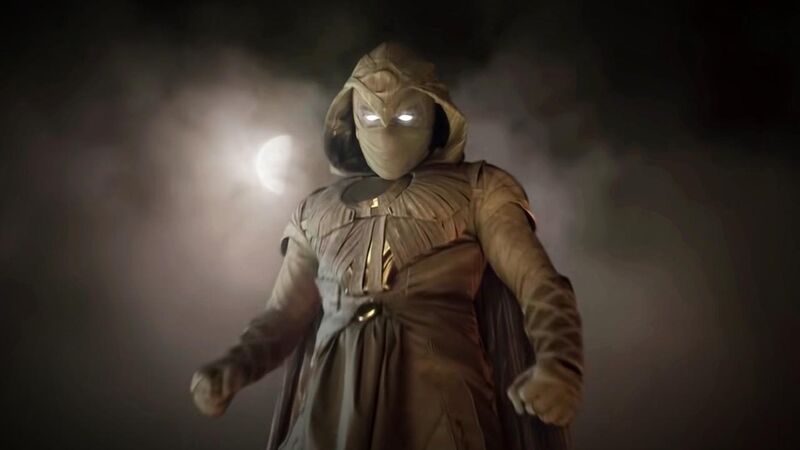 Moon Knight: How Bad Are Capes, Actually, In a Real-Life Fight?

When it comes to superheroes, capes serve all sorts of purposes, from stopping bullets in Batman to joining in with the fighting in Doctor Strange. The latest series to be added to the Disney+ roster of Marvel Cinematic Universe shows,?Moon Knight —?starring Oscar Isaac as the titular superhero ––?promises a gritty, more realistic style of fighting. With that in mind, we sat down with professional fight coordinator, whipmaster, swordmaster, and actor Anthony De Longis (who has worked on movies like Batman Returns and Indiana Jones and the Kingdom of the Crystal Skull) to talk about the pros and cons of wearing a cape when it comes to combat in real life.

First things first. ItˇŻs important to differentiate between a cape and a cloak.

ˇ°Well, if it has a hood, it’s a cloak. If it doesn’t, it’s a cape. There are exceptions to those rules, but that’s an overview,ˇ± says De Longis.

SoˇŞSuperman, cape, Batman, cloak. If weˇŻre using the correct terms, Moon Knight dons a shiny white cloak as well. But to keep things simple here, letˇŻs just refer to all swooping fabrics hanging off a heroˇŻs shoulders as a cape. So what are the main purposes of using a cape when fighting?

ˇ°When fighting with a cape, you can hide your body and you can hide your feet,” explains De Longis. “If you hide your feet, your opponent can’t see your preparation. They may think you’re going to attack directly, but you’re actually setting up to go slightly offline. In which case, if they were to launch an attack, you’re already not there anymore. Now, you’re engaged to counterattack. The movement of the cape becomes a visual distraction.ˇ±

You could also use it in certain situations to blend into crowds if you find yourself needing to make a hasty retreat — another cool use for the swath of fabric.

To Protect and Serve

The cape has a rich history in real-life fighting, and even the Aztecs knew their worth, cladding their Eagle Warriors and Jaguar Warriors in the garment. Roman centurions wore them, too.

But capes arenˇŻt only used to distract your opponent, though it may seem like the most obvious benefit. Capes can also be used as a form of protectionˇŞin certain cases.

ˇ°If the cape is against somebody’s body, it would provide them with a little bit of protection, though not for very long because there’s resistance, and the thrust will penetrate,” says De Longis. “But if you’ve managed to get a little distance between the cape in front of you, when someone would go to stab you, theyˇŻd get caught in the cape and that could be bad for them.ˇ±

Another way to think about this, as De Longis points out, is by imagining stabbing a dagger through a hanging curtain. The hanging fabric would certainly slow the blade down on the daggerˇŻs way to the target, and if your blade gets caught up in the curtain, you may even lose control of your weapon. So a cape, even if it isnˇŻt bulletproof like so many of BatmanˇŻs seem to be — and, as we see in the trailer above, Moon Knight’s — can provide some protection in a fight. That isnˇŻt all. When it comes to hand-to-hand combat, a cape can even serve as a quasi-weapon.

ˇ°If you had no weapon, throwing [a cape] in their face would allow you to get into hand-range where you’d be able to strike or disarm their weapon,” says De Longis. “If you, all of a sudden, throw a heavy cloak on somebody’s attacking arm, it’s like someone’s holding their arm down. You essentially weighted it down for long enough to be able to do something about it.ˇ±

Presumably, it would also be useful to help block an animal attack.

To Be Used Against You

Of course, wearing a cape isnˇŻt all sunshine and smiley faces. A cape can be used as a weapon against you too, especially if youˇŻre wearing one the wrong way.

ˇ°If I grab your cape and it’s attached to you, I can potentially pull you off balance. If I get your cloak and throw it over your head, it would be like putting a pillowcase over your head. If the cape is still attached to you, which it usually is, around the throat (if you’re smart, you actually run it down and under the armpits), you can strangle yourself.ˇ±

There’s a moment in The Batman that illustrates some of the pitfalls of wearing a cape during combat where Batman’s opponent grabs hold of it to gain an advantage over the Caped Crusader.

A cape has its benefits but it also gives your attacker more places to grasp at you and throw you off balance. It can also give them the terrifying opportunity to choke you. So, when wearing a cape, you should definitely keep an eye on whether or not itˇŻs looped around your neck. No one wants to get strangled by their own cape.

To Keep the (Gotham) Rain Off

When asked why people stopped using capes when they’re fighting, De Longis responds, ˇ°Firearms, probably. [A cape] is extremely effective against bladed weapons.ˇ± Whichˇ­ makes a lot of sense. Unless youˇŻre Batman, your fashionably billowy cape probably wonˇŻt do much against a bullet — or even a bomb in the case of Robert Pattinson’s Batman whose entire get-up offered him considerable protection against a close-range explosive device — and it can cause problems if you get tangled up or if your enemy takes ahold of it. It will do plenty to protect you against the incessant rain of Gotham, of course, should you find yourself in the area.

As for his overall professional opinion, De Longis agrees that capes look cool, especially on superheroes, and that they do have their pluses, at times, when it comes to fighting. But, he emphasises, itˇŻs always important to remember the risks of getting tripped up or even trapped by your snazzy cape.

ˇ°[A cape] does have its practical use, particularly for a superhero character,” says De Longis. “But you just don’t want it to turn into Edna ModeˇŻs admonition from The Incredibles: No capes!ˇ±

So there you have it. Capes are good… and also bad.

Catch Moon Knight using his spectacular crescent-shaped cape in the new series which premieres on Disney+ on March 30 (and hope it doesn’t trip him up — literally).

Click below for our full interview with Moon Knight stars Oscar Isaac and Ethan Hawke who talk the psychology of their characters, their prior rejection of the MCU, and the characters they wanted to be growing up.