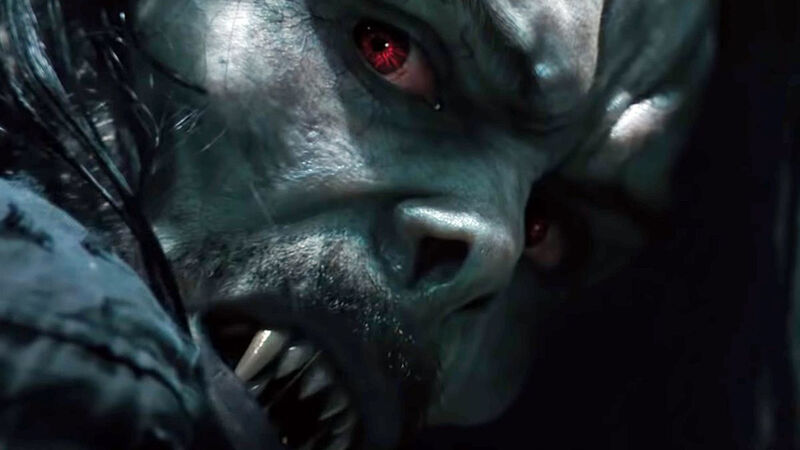 ThereˇŻs a very funny meme doing the rounds on social media, ˇ°Robert Pattinson ¨C Worst Vampire Ever! Took 14 Years to Become a Batˇ±. ItˇŻs mocking the one-time Twilight fang-tastic heartthrobˇŻs lengthy journey to taking on the role of GothamˇŻs Dark Knight ¨C and is not a charge that can be levelled at Jared Leto. Even though his new super-anti-hero movie Morbius has been long delayed, within the film itself, Dr. Michael MorbiusˇŻs transformation from ailing, blood-diseased human patient to virile, bloodthirsty monster is pretty rapid. All the better to delve into how he finds a way to live with the beast now inside him.

MorbiusˇŻs desperate treatment, combining the DNA of human and vampire bat ¨C the only mammal that survives solely on blood ¨C leads to this genetic mutation, a curse the good doctor tries to twist into a blessing. Aside from several obvious bat-like abilities (flight, echolocation), the filmmakers are clearly leaning into natureˇŻs more jaw-dropping phenomena to bolster credibility. ItˇŻs science fantasy, of course, but Dan Eatherley, nature writer and author of the critically acclaimed Invasive Aliens outlines some of those real-life examples used to help blood the Morbius legend.

Zoonotic viruses ¨C those that spread from animals to humans ¨C have been big news: Ebola, Rabies, SARS and, of course, COVID-19. And thereˇŻs always been one species immediately under suspicion for causing these outbreaks, since itˇŻs a viral superhostˇ­

ˇ°Bats have these weird genetic sequences which give them a really powerful immune system,ˇ± explains Eatherley, ˇ°so viruses donˇŻt necessarily harm them, but instead lurk in their bodies for a long time, replicating and mutating. In the worst cases, whole new deadly variant viruses can emerge ¨C then spill over into the human race.ˇ±

And thanks to their super-duper immune system, bats live way longer than most creatures their size. ˇ°If you think about most small mammals, like a mouse, it might only live a few weeks or months,ˇ± says Eatherley. ˇ°Whereas bats can live up to forty years, so thereˇŻs much more chance of them passing on a virus. They found the ultimate anti-ageing serum in a set of physiological pathways. So MorbiusˇŻs longevity and ability to heal himself is very much a bat-like quality!ˇ±

There are also viruses in the natural world ¨C like rabies which as weˇŻve said can be transferred by bats ¨C that can elicit vampire-like tendencies in their human hosts, some of which are sometimes referenced as the root of vampire folklore. In this case, rabies can cause aggressive behaviour and an urge to bite as well as an aversion to water (the holy kind counts!), strong smells (garlic, anyone?), and bright light.

IˇŻm Gonna Get You, (Blood) Sucker…?

MorbiusˇŻs insatiable thirst for blood is, of course, ever-present in the eternal vampire mythologies, one that often works the vampire bat itself into the lore. But if vampire bats are the animal kingdomˇŻs most renowned bloodsucker, theyˇŻre far from the only one.

ˇ°The kissing bug may sound sweet and friendly, but itˇŻs actually a very deadly insect,ˇ± reveals Eatherley. ˇ°TheyˇŻre so-named for their propensity to bite humans and other hosts around their mouth or eyes. They not only drink your blood, but defecate on you, releasing parasites. This causes Chagas disease, a debilitating and potentially fatal illness, causing heart and digestive problems.ˇ±

ˇ°The disease is mainly found in South and Central America and the southern states of the USA. They believe itˇŻs what killed Charles Darwin,ˇ± he goes on. ˇ°Worse still, they can attack at night and without waking you. When I was a child and we lived in Bolivia, my parents found the kissing bug under my bed, so they thought maybe I’d been bitten by one!ˇ±

Bats and bugs might not be unusual suspects for blood lust, butˇ­ birds? On the Galapagos Islands, thereˇŻs one particular avian species that preys on the sea birds who live on the Wolf and Darwin Islands there: the vampire ground-finch. ˇ°When food is scarce, which is not unusual,ˇ± Eatherley explains, ˇ°the ground-finch lands on the back of the booby, and uses its long beak to peck into their blood vessels.ˇ±

The superhero self-healer, able to regenerate to recuperate, is a trademark for numerous comic-book characters, from Wolverine to Deadpool. Through his vampire-like abilities, Morbius inherits a regenerative healing factor that isnˇŻt as outlandish as you may imagine, when itˇŻs witnessed in the natural world.

ˇ°The African spiny mouse has an incredible ability to regenerate its skin tissue,ˇ± notes Eatherley. ˇ°When bitten or clawed by a predator it will shake itself free, happily shedding up to 60% of the skin on its back as it escapes. This obviously creates a large open wound, but within just three days, the wound is completely healed over with new skin. The same healing process in a rat would take twice as long.ˇ±

Eatherley also highlights a creature he examined in his Invasive Aliens book, the New Zealand flatworm, which is causing significant soil issues after its introduction to the United Kingdom, given its diet of earthworms. ˇ°Some flatworms can regenerate their body from a single cell,ˇ± he says. ˇ°And there is research that shows when the flatworm regrows its head and brain, it can retain the memories from the former head, for example if itˇŻs been trained not to avoid bright light to hunt for food, the new head will also adapt to this training.ˇ± Poor earthworms donˇŻt stand much of a chance.

Red in Tooth and Claw

ˇ°People often assume that lions, tigers or bears are the most dangerous mammals on earth,ˇ± points out Eatherley. ˇ°And they almost always underestimate the hippopotamus, which is in fact the deadliest. They also have the four largest canine teeth of any land animal, up to sixteen to twenty inches long.ˇ± When threatened their attacks are fast ¨C they can move at up to thirty miles per hour, and with a bite force of almost one tonne ¨C and can be devastating. And all this from a vegetarian.

In the comics, Morbius is renowned for his retractable claw (though, sure, WolverineˇŻs adamantium claws are the Marvel universeˇŻs most famous examples). The cat family obviously have this feature, along with foxes, but thereˇŻs a much more unusual creature that Eatherley pinpoints.

ˇ°The Japanese Otton frog has a bony spike in its foot,ˇ± he explains, ˇ°Most species have just four on their front legs but this frog has a fifth front toe ¨C they call it a ˇ°pseudothumbˇ± ¨C and the spike is housed inside. The males use their spikes as anchors to latch on to the females during mating; and as sort of flick knives for when fighting with rival males.ˇ±

Dracula in the Bram Stoker novel and his many screen incarnations, has the power to mesmerise, almost hypnotise, his victims and itˇŻs a talent Michael Morbius has also absorbed. So is that a real-world phenomenon too? If we go by many stories, people might imagine that snakes, particularly cobras have such hypnotic powers.

ˇ°Fake news, IˇŻm afraid,ˇ± says Eatherley bluntly. ˇ°NatureˇŻs true hypnotists are cuttlefish, which use millions of little colour cells in their skin, each controlled by a neuron. Not only can these crafty cephalopods camouflage themselves by changing colours (like the squid and octopus), but by turning their skin cells ˇ®off and onˇŻ, they create rhythmic patterns to befuddle their fish or crustacean prey into stunned submission, allowing them to get close and strike.ˇ±

Check out our interview with the director and cast of Morbius below.