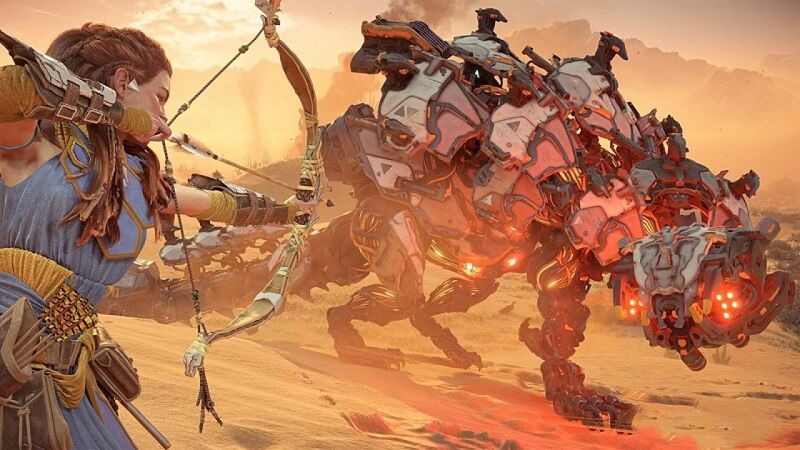 Pack your sunblock and your fire arrows, because AloyˇŻs hitting the beach! Horizon Forbidden West, the hotly anticipated sequel to Guerrilla GamesˇŻ 2017 hit RPG Horizon Zero Dawn, sees our favorite mountain-spawn setting off on a road trip for California, where presumably she will relax, learn to surf, and maybe get a tan. (Okay, sheˇŻs there to stop a terrifying plague thatˇŻs threatening man and machine alikeˇŞbut thereˇŻs always time for some fun in the sun!) Unfortunately, a slew of scary new monsters are standing (or swimming) in her way. Get ready for the beach trip of a post-apocalyptic lifetime with our guide to the machines of the Forbidden West!

The Bristleback is the first new machine Aloy encounters in her journey to the Forbidden West. ItˇŻs considered Acquisition ClassˇŞmeaning, itˇŻs designed to harvest resources. Acquisition Class machines typically resemble modern-day herbivores, and Bristlebacks, which look like warthogs, are no exception. These porcine pals may not be designed for combat, but donˇŻt let that fool youˇŞthose sharp tusks arenˇŻt just for show.

You know how otters are cute and little? Shiny sleek friends who live in the water and smash tiny critters with rocks? In Horizon Forbidden West, otters are Burrowers, and these aquatic machines donˇŻt need any rocks to cause serious damage to tiny critter Aloy. Burrowers fall into the Recon Class of machine, meaning they act as sentinels, keeping their robot eyes peeled for threats and emitting a high-pitched shriek when they spot trouble. Remember how annoying the Watchers were in Horizon Zero Dawn? Well, imagine if they could swim.

Clamberjaws, the meanest monkeys since Mojo Jojo, are another Acquisition Class machine. They scavenge in packs, using their simian-like claws and tail to salvage scrap. Their large friend groups arenˇŻt the only reason these guys are a pain in the butt to fight, of course: theyˇŻre able to climb easily up walls and trees (something Aloy struggled with in Zero Dawn) and theyˇŻve got a super annoying mask that can cover their face, making head shots that much more challenging.

Clawstriders were initially introduced in the Horizon Zero Dawn comics, so even though they arenˇŻt technically new, Horizon Forbidden West will be playersˇŻ first chance to take them on. And, uh, good luck with that. These Combat Class machines resemble velociraptors, and, much like IRL velociraptors, rarely hunt alone. They are fast, agile, and extremely aggressiveˇŞalso, they look frigginˇŻ scary. Each Clawstrider comes outfitted with sharp claws, metal ˇ°feathers,ˇ± and two chainsaws where its lower jaw should be. But, hey, if AloyˇŻs brave enough to take one on, she might just make a new friend! ThatˇŻs rightˇŞthese terrifying dino-bots are mountable.

This enormous cutie is a RollerbackˇŞa Transport Class machine that vaguely resembles a pangolin. A Rollerback is capable of rolling into a ball shape, flattening its enemies and leaving a trail of fire in its wake. Players squaring off against these guys should also be wary of their ranged attack: detachable scales that transition into dangerous aerial projectiles. Between the scales, the fire, and the giant terrifying metal ball barreling straight in AloyˇŻs direction, ˇ°stop drop and rollˇ± has never been more deadly.

Do you remember how cool it was when Aang met the lion turtle in Avatar: The Last Airbender? Well, this is the opposite of that. Shellsnappers, which resemble enormous turtles, guard shorelines and swamps. These be-shelled boys will dig into the earth, lying dormant for weeks and allowing vegetation to flourish on their backs as a form of camouflage. In spite of their size, and the fact that they are turtles (a historically slow animal), they actually move pretty dang fast. Shellsnappers can also blast their enemies with powerful bursts of pressurized water. Oh, and remember that shell itˇŻs got? Not only does it protect it from incoming attacks, it builds up energy each time it takes damage. Once it releases that energy, it can stun any enemies in rangeˇŞso unless Aloy wants to become pressure-washed turtle chow, she should get the heck out of the way.

You know how regular-sized snakes are scary? Well, have we got bad news for you: it turns out enormous robot snakes are also scary. Possibly even more so! This cobra-like terror made its intimidating debut in the Forbidden West trailer, and seems to be just as nightmarish as it seemed when we first caught a glimpse of it. One: itˇŻs enormous. Two: it spits acid. Three: it can wrap itself around buildings. And, you know what? No thanks! It can keep that building! OhˇŞthereˇŻs also its tail to worry about. The rattle on the end (because it is both a cobra and a rattlesnake, ack ack ack) can hit its enemies with a mean lightning attack. Basically, if youˇŻre going up against this thing, keep your health potions at the ready.

Sunwings are another Acquisition Class machine, collecting energy with their solar panel wings, just like real Pterosaurs used to do (probably). TheyˇŻre super fast and agile, flying high in the sky to capture all of that sweet, sweet sunlight. They can travel alone or in packs, so if you stumble into one, be sure to stay alertˇŞthe rest of the flock could be close by. If there’s one thing we’ve learned from The Legend of Zelda, there’s nothing more deadly than a whole lot of birds.

Another aquatic machine, this big metal fella gathers resources by sorting through sediment with its built-in filters. When itˇŻs not performing important functions to keep the planet alive, itˇŻs delivering powerful attacks against its enemiesˇŞin the water and on land. Yeah, this giant Plesiosaur-esque beastie is amphibious, so hightailing it out of the water wonˇŻt be enough to escape a fight.

This massive machine made one of the biggest impressions in the Forbidden West trailerˇŞliterally. Look how huge it is! Just like a real elephant. Unlike a real elephant, though, Tremortusks have four tusks (hence the name), heavy armor plating, cannons, and a trunk that it can use as a flamethrower. And donˇŻt bother trying to hide from themˇŞthey can smash open structures, exposing anyone cowering within. Even more terrifying: Regalla, AloyˇŻs newest human enemy, seems to have several under her control. Uh oh!

If you feel like youˇŻre ready to square off against the new threats of the Forbidden West, you donˇŻt have long to wait. Horizon Forbidden West is launching February 18 on PlayStation 4 and PlayStation 5. Want more information on the world of Horizon? Be sure to visit the official Horizon wiki. It could be worth brushing up on the machines from the previous game, too. Oh, did we forget to mention? All the old robo-dinos are back. Better start prepping those tear arrows and tripwiresˇŞand, again, donˇŻt forget the sunblock.