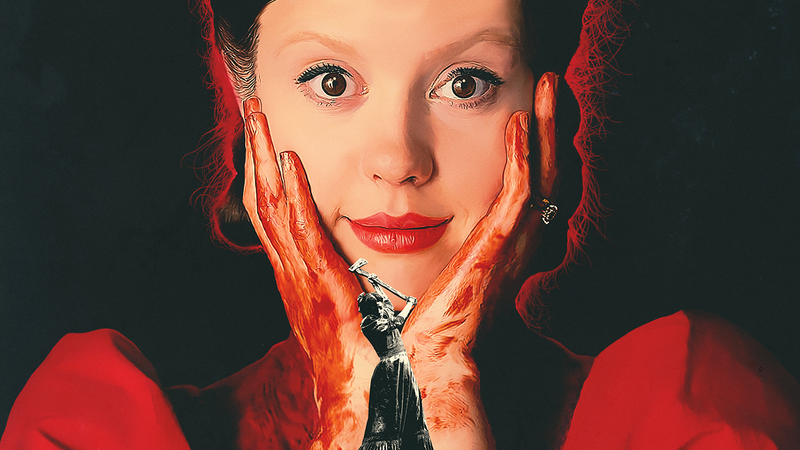 There are a few rare examples ¨C Iron Man and The Incredible Hulk kicking off the MCU by debuting a few weeks apart comes to mind ¨C but itˇŻs not at all common to have a brand new franchise get an immediate follow-up within the same calendar year. Of course, what makes A24ˇŻs X horror series stand out even more though is that unlike, say, Netflix’s Fear Street trilogy, we had no idea this was even going to be a franchise when the year began.

As depicted in the prequel, the young Pearl initially feels like a classic movie heroine in a movie that purposely evokes a classic movie style – both with its vibrant color palette and its look at a bright eyed, small town girl with dreams of journeying elsewhere for a bigger and better life, a la Dorothy in The Wizard of Oz. Except we know thatˇŻs not what PearlˇŻs future holds. Her future is going to be staying right on the farm she loathes, murdering a whole bunch of people who cross her path. Because, as the film explores, Pearl is not entirely well.

I spoke to West, Goth, and David Corenswet (who plays a local movie projectionist Pearl becomes drawn to) to discuss the filmˇŻs strong visual style, the unusual opportunity doing these two films offered Goth as an actor, and filming a movie set during a pandemic from a century ago during our current pandemic.

Oh, and I tried to get West and Goth to talk about the potential for a third film, only for that movie to be announced just a day later, as we learned MaXXXine is coming, with Goth returning as the other character she originated in X. This time, they havenˇŻt secretly filmed the next installment yet, but still, this is quite a thrilling launch to a seriesˇ­

The very first footage revealed from Pearl, via the surprise teaser shown after the closing credits of X, immediately established that this film would look nothing like its dark and gritty predecessor, which West said was the plan from the start. ˇ°If we were going to do it, we were going to have to do a very different aesthetic than X. X, in a way, was about independent filmmaking in the 1970s and 60s, sort of auteur Americana independent filmmaking, and that’s just not what the Pearl story was.ˇ±

WestˇŻs original plan for Pearl‘s visual style was quite different though, as he recalled, ˇ°Knowing that it was going to take place in 1918, originally I was thinking of it in this sort of German expressionist, black and white way. Partially because I thought that would be an interesting way to tell the story, but also because it would have just been, frankly, cheaper because we were going to retrofit all this stuff.ˇ±

Pearl is set on the exact same farm as X, but decades earlier, when everything looks much newer and tidier and in far better shape than we see it during XˇŻs 1979 timeframe. If they filmed in black and white on those same sets, West elaborated, ˇ°If it was neon blue or whatever, it didn’t matter, it would just be gray. So these were all things to make it more efficient and more convincing for A24 financially to do it, because at the time, I was desperately looking for whatever I could come up with to convince them we should make two movies in a row.ˇ±

However, the more he thought about it, the less appealing the black and white style was, with West explaining, ˇ°The idea [of the film] seemed to be fighting that a little bit, in that it was a bit like a children’s movie in a way or a movie about ambition and wonder and dreams. And so my other idea was this very vibrant, colorful movie. Also A24 had just made a few black and white movies, and they probably would have made it in black and white, but they weren’t as thrilled about that, because there was just a lot coming out at the time. And I was like, well, the alternative is just to go really colorful and do it in the sort of the Technicolor inspired Golden Age of Hollywood kind of way. And that was a little bit more expensive but they were supportive of the idea. And so now it’s hard to imagine it any other way. If you read the script and thought of it as this heavy, black and white, old fashioned, early turn of the century horror movie, you could picture it for sure. But we made the right choice.ˇ±

David Corenswet was new to the franchise, having not been in X, but having now seen the two films, he admired how deceptive PearlˇŻs colorful look is, offering viewers a bright, inviting world where some very bad and bloody things are going to happen. ˇ°The 70s aesthetic in X has a little bit more, I think, unnerving qualities about it. The cinemascope, Technicolor [visuals] just makes you think of hope and dreams and fluffy clouds. And so to have that be the intro to the movie and knowing where it was going, itˇŻs very exciting as a counterpoint to the aesthetic of X.”

Film fans are familiar with the idea of actors coming up with backstories beyond what the script explicitly says for their characters, thinking more about what motivated them and made them into the type of person they are playing. Mia Goth though had a unique opportunity playing Pearl, because while she was getting ready to make X, she was quite literally writing PearlˇŻs backstory for the prequel alongside West.

Looking back at this time and using it to fuel her initial performance as the older Pearl, Goth remarked, ˇ°Ti and I had always said it’s a pretty big long shot that Pearl‘s ever going to get made. So at the very least, writing the script for Pearl would serve as an amazing backstory [for X] – and it did!ˇ±

Explaining the process of writing during XˇŻs pre-production, Goth recalled, ˇ°We were talking regularly, most evenings. He was in New Zealand, I was in New York, and we were getting to know each other. We were exploring ideas and her backstory and her relationship to all the other characters. And it was a really wonderful time.ˇ±

Goth said they got increasingly hopeful that Pearl might actually happen as she arrived to film X in New Zealand, recalling, ˇ°By the time I went through my quarantine and we started putting the pitch together for A24, everything just kind of came together. Just as it was meant to.ˇ±

While not the primary focus of Pearl, one thing that definitely stands out is the filmˇŻs inclusion of the 1918 influenza pandemic (AKA the Spanish Flu) in a notable manner. PearlˇŻs father (Matthew Sunderland ) is?now an invalid thanks to his bout with it and her domineering mother (Tandi Wright) is incredibly paranoid about it infecting anyone in the household again.

West noted that rather than realizing they could incorporate the 1918 pandemic into the story after setting it there, it was infused into the plot from the start, explaining, ˇ°When you rolled back the clock on Pearl’s age, an interesting movie landed somewhere in the mid-teens or late teens. And it just seemed like, well, if we’re gonna go to the late teens, there’s this unbelievably relevant thing that’s happening at the same time. So that was a big part of setting it there.ˇ±

West added they realized the resonance worked with the story because, ˇ°Pearl feels so isolated and at the time we were writing it, everybody felt the same way. So it was an interesting way inˇ­ To certainly not make a COVID movie, but to make a movie that was weirdly modern and unfortunately relatable.ˇ±

As for what it was like to perform scenes set during a pandemic from 100 years ago right in the midst of our modern pandemic, Corenswet said, ˇ°I had been thinking about it because I had read the articles that had been written about the old newspaper clippings and the warnings to wear your mask in 1918. So I thought it was great for that reason, because it felt very relevant.ˇ±

We see Pearl reminded by her mother to put her mask on when she goes into town and wearing it while at the store and at the movies, as most others do the same, and Goth said this connection to what we all have now experienced, ˇ°Just helped. Being an actor and understanding the world that your character is living through, it kind of felt like we were doing some sort of prep to get into our charactersˇŻ shoes for Pearl.ˇ±

When I spoke to the Pearl crew, I had to ask about a potential third movie. When X opened, West had talked about a possible sequel besides the already-filmed prequel and on top of that, there are also several decades between the first two films that could be filled in.

West was coy during our conversation, saying, ˇ°I have some ideasˇ­ We’ll see. X was warmly received, which I’m quite grateful for, and I’m hopeful that itˇŻs the same for this and I’ve had a great experience with Mia and A24. ItˇŻs be great to do more.ˇ± Said Goth, ˇ°It would be a dream to work with Ti and and A24 again, so we’ll see.ˇ±

Of course, ˇ°weˇŻll seeˇ± turned out to be a cover for ˇ°itˇŻs totally happening,ˇ± as history repeated itself with another surprise announcement for the X series to continue tied to PearlˇŻs Toronto Film Festival debut this week – this time via a sequel, set in the 1980s, entitled MaXXXine.

As the title implies, Goth will now be reprising her other character from X, porn star Maxine, who ultimately killed Pearl and was the only survivor of the massacre in that film. Following the Toronto screening of Pearl, which included the post-credit teaser for MaXXXine, West told the audience, ˇ°What I can tell you is that we’re going to catch up with Maxine, and we’re going to find out what she’s up to. The way that X is a movie that is informed by and affected by cinema and independent exploitation auteur Americana 1970s cinema and Pearl is perhaps affected by this golden age of Hollywood glitz and glamor of cinema, MaXXXine will be more about within the industry itself and the boom of VHS and things like that. IˇŻve got to be pretty tight-lipped because we made it this far!ˇ±

Pearl is in theaters Friday, September 16.