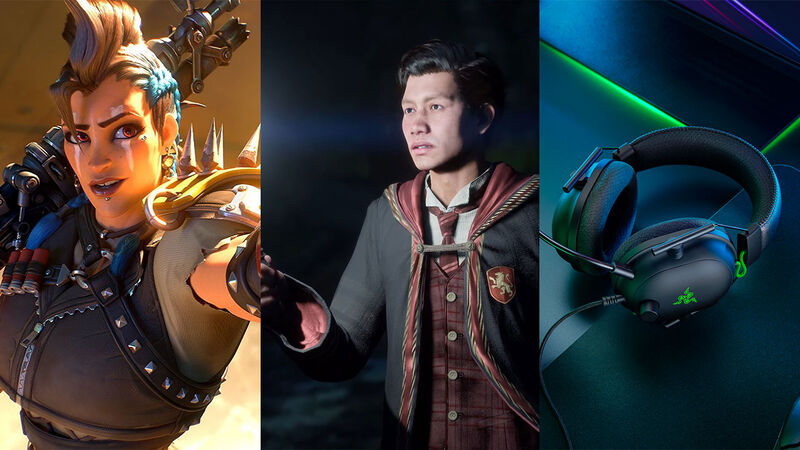 Although weˇŻre over halfway through 2022, there are still plenty of long-awaited additions to PC gaming in the coming months. While console players squabble over whether AAA titles are better on the PlayStation 5 or the Xbox Series X, PC gamers can relax knowing they can keep upgrading their set-up to get the most out of the yearˇŻs new releases. From action-packed superhero adventures and multiplayer chaos to the new hardware that takes your immersion to the next level – this is your guide to PC gaming in 2022.

ItˇŻs crazy to say it, but Overwatch 2 is finally on the horizon. It was announced way back in 2019, but itˇŻs heading to PC and consoles in October this year. The sequel is taking a new approach to the format in the first game, as it turns to a free-to-play model for its PvP mode. ItˇŻll also feature a PvE mode that follows a narrative structure in its gameplay. If that isnˇŻt enough, thereˇŻs also the brand new Push mode, as each team battles over a robot pushing a wall through the map.

If youˇŻre worried that this is just the first game bolstered with one new game mode, donˇŻt worry. Activision Blizzard is also pumping the sequel full of new heroes and new maps. So far, the studio has confirmed a new Damage hero, Sojourn, and a new Tank hero, Junker Queen. But thereˇŻll be more additions to the roster in each season.

OverwatchˇŻs maps always make for a great photo opportunity and the sequel will take the action to Rio de Janeiro, Toronto, Monte Carlo, and Gothenberg. Considering how gorgeous the first game is, itˇŻs highly likely that these maps will give players plenty to explore alongside the carnage.

Players have stepped into BatmanˇŻs thug-face-stained boots many times over the years, but WB Games MontrealˇŻs Gotham Knights puts the Bat-Family in the spotlight as they investigate the death of the Caped Crusader and Commissioner Gordon. The story sees players suit up as Nightwing, Batgirl, Robin, and Red Hood, as they go up against some of the most iconic villains from BatmanˇŻs rogueˇŻs gallery, including the Court of Owls, Mr Freeze, and the Penguin.

This means youˇŻll have to use the Bat-FamilyˇŻs varied skills to take down these equally different threats. Prefer a combo-stacking, acrobatic fighting style? Hello, Nightwing. Meanwhile, Batgirl can hack her way around a problem, and Damian WayneˇŻs Robin is a stealth expert. And if you prefer some (arguably non-lethal) ranged violence, try Red HoodˇŻs dual pistols on for size. Thanks to the gameˇŻs cooperative mode, itˇŻs going to be a blast playing it with a friend. DonˇŻt worry, you donˇŻt have to fight over playing as a specific character; both players can team up as the same vigilante.

A gamer is only as good as their equipment allows them to be. You can have the best reflexes in the world and the eyes of a hawk, but itˇŻs all for nought without hardware that can translate that quickly and efficiently to your screen. The Razer Huntsman Mini keyboard is designed specifically with gaming in mind. All keys are macro-programable with custom backlighting options for each. Its small size also means you can customise your gaming setup and have more space to manoeuvre your mouse. Speaking of whichˇ­

To complement your gaming keyboard, you need a decent gaming mouse thatˇŻs able to keep up with you. Thankfully, this year saw the introduction of the Viper V2 Pro mouse to make sure you can get the most immersive experience from your game. ItˇŻs ultra-lightweight and 25% faster than other mice, which is always useful, but has exceptional click latency with a comfortable symmetrical shape, meaning you can click your foes to death with reliability and comfort.

Aside from everyoneˇŻs favorite battle royale, Warzone, the sequel will introduce a new mode called DMZ. This will see teams of players fight across large maps against other squads to get their hands on the best loot the game has to offer. After that, theyˇŻll have to extract themselves from the map to keep it.

Jumping online at home with a full set-up is obviously fun, but sometimes itˇŻs just not practical to take a tower, the monitor, and all those Twitch-inspired neon light strips with you when youˇŻre on the move. RazerˇŻs Blade 15 gaming laptop is ideal for anyone who wants to play remotely. DonˇŻt worry, it wonˇŻt sound like a jet engine taking off either, the NVIDIA GeForce RTX 30 series GPU is designed to make gaming laptops as fast as possible. Of course, being fast doesnˇŻt always mean gameplay looks goodˇ­

This is why theyˇŻre built using Ampere to deliver ray-tracing graphics. Just because youˇŻre on the move doesnˇŻt mean you should have to put up with low frame rates and poor visuals! The base model has a Full HD 144Hz display, while the new version has FHD 360Hz, QHD 240Hz or 4K 144Hz. ItˇŻs also worth adding the BlackShark V2 headset to your remote set-up if you want to team up with your squad. The Hyperclear Cardioid Mic picks up your voice without any background noise, so youˇŻll be able to coordinate with your team and they wonˇŻt hear anything else in the room. DonˇŻt worry, the closed ear-cups also block out background noise, so you can keep your head in the game no matter where youˇŻre playing.

After years of asking, Harry Potter fans will get the chance to jump into the Wizarding World in Hogwarts Legacy. The game will take players on an original adventure through the titular school in 1890 as you create your own witch or wizard, with their own set of skills and customization options. And yes, youˇŻll even get a broomstick to fly around the schoolˇŻs sprawling map, which will also let you explore locations like the village of Hogsmeade and the Forbidden Forest.

From there, players can take various classes and learn a variety of new spells before realizing that their character can use ancient magic. Clearly, thereˇŻs going to be some wand-to-wand combat involved, so youˇŻd best ensure your reflexes ¨C and the reflexes of your hardware ¨C are up to scratch.

Eammon
EJacobs94
An Entertainment Journalist who frequently rants on Twitter (@EammonJacobs) about how great Tron: Legacy is.