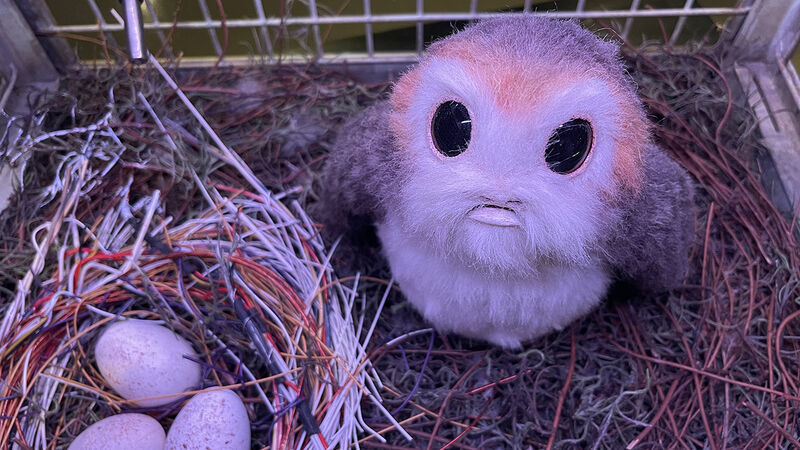 Yes, youˇŻll want to free the Porg. How can you not? There it is, locked up in a cage, making its little Porg noises at you, next to its Porg eggs. FREE THE PORG! But actually, donˇŻt. One, because youˇŻd be messing up Disney property and two, because the Porg is being taken good care of. Just ask Quinn.

The Porg in question can be found in the Star Wars: Cargo Bay on the new Disney Wish cruise ship, where the Cargo Bay is one of two Star Wars-specific areas on the ship. Cargo Bay is part of the kids area known as the?DisneyˇŻs Oceaneer Club, one of several such spots young passengers can find different entertainment in themed around different aspects of Disney, Marvel included.

The Cargo Bay area is highly detailed, meant to evoke a Star Wars spaceship – one, in this case, that is transporting creatures to the planet?Batuu for safekeeping. There is plenty to investigate throughout the area, including ship controls, droid parts, and other familiar devices from a galaxy far, far away.

And, of course, there are some creatures there as well, including that aforementioned Porg, whose cuteness is only rivaled by a sleeping Loth-cat, holding onto a stuffedˇ­ Porg.

I visited the Cargo Bay during the recent Christening Cruise for the Disney Wish, getting an idea of what kids will find there when doing the full experience (there are hours for kids only, and then open house times when adults can visit as well). But that’s not all that Star Wars fans will find on the ship, which also includes an area off limits to kids at night filled with drinks from some very famous locations – and one specific drink with a notably extravagant price.

Kids visiting Star Wars: Cargo Bay learn about the journey they are on and meet an original character, Quinn, who is a specialist in caring for these different aliens and is in charge of keeping them safe on the ship. As it turns out, there are many more Porg onboard, and unlike our caged friend, several have gotten free and created nests in the area.

The story then escalates as the young guests learn that rathtars have gotten loose and their help is needed to round them up. As Lindsey Barnes (Guest Experience Manager-Youth Activities) explained to me, ˇ°We’re gonna have games that the kids can play. So we’ll have a game where they’ll be able to find creatures on a tablet; they’ll be able to go around and they’ll be able to search for those [rathtars].ˇ±

But Quinn and his creatures are not the only ones traveling to Batuu it turns out, as it is revealed that none other than Rey and Chewbacca are also on the ship as Resistance stowaways. Chewbacca in fact will be something of a regular in Cargo Bay for guests to encounter, while Rey will come through and interact with guests at various times. Plus, Barnes told me, you might spot a Stormtrooper or two hunting for the Resistance (hopefully none of the kids will turn out to be a First Order turncoat and try and give Chewie and ReyˇŻs presence away).

BUT LETˇŻS TALK ABOUT THE BAR

Sure, Cargo Bay is good fun for the kids, but If youˇŻre an adult Star Wars fan looking for a kid-free area, donˇŻt worry, thatˇŻs covered on the Disney Wish too via Star Wars: Hyperspace Lounge. While kids are allowed into the area during the day, at night, Hyperspace Lounge becomes adults-only.

On the other Disney Cruise ships, the Star Wars spaces had almost always been something mainly aimed at kids, like Cargo Bay. With the Disney Wish being developed as a brand new ship, Lauren Fong (Assistant Project Manager, Walt Disney Imagineering), explained, ˇ°We heard the fans, we heard the adults that want a Star Wars space for them too. So we got the idea to create a very high end, high class lounge. So we are on a cruise ship, but now we’re on a spaceship traveling throughout the galaxy.ˇ±

Unlike the Star Wars: GalaxyˇŻs Edge lands at Disneyland and DisneyˇŻs Hollywood Studios or the Star Wars: Galactic Starcruiser experience, which both are rooted in the sequel era (specifically between The Last Jedi and The Rise of Skywalker), Fong noted that in Hyperspace Lounge, ˇ°We’re not tied to any specific timeline or location. So it’s a celebration for all Star Wars fans, both new and old. There’s Easter eggs that you’ll see in the windows and our props for hardcore Star Wars fans and it’s also very inclusive. If you’re a casual Star Wars viewer, you can also feel very welcome here.ˇ±

The window in question is a viewport behind the bar that depicts space scenes from the Star Wars universe set above many familiar locations, from Coruscant to Tatooine to Mustafar, with the change in scenery provided by the ship jumping to lightspeed every few minutes.

Through the viewport, a ton of familiar ships fly by, and as Fong noted, theyˇŻre not rooted to one era: The ships my friends and I spotted included the Ghost from Star Wars Rebels, the Razor Crest from The Mandalorian, the?Starspeeder 3000 from Star Tours, and the Halcyon from Galactic Starcruiser, along with X-Wings, Y-Wings, TIE Fighters, and other familiar iconic craft.

The idea of jumping around the galaxy and through Star WarsˇŻ history extends to the Hyperspace Lounge menu, which is based around drinks from different Star Wars locations. That includes The Golden One from the Moons of Endor (Belvedere Blackberry & Lemongrass, Amaretto Velvet), The Chancellor from Coruscant (Hennessy James, Calvados Menorval 1972). I enjoyed all of the drinks I sampled, but my personal favorite among those I tried was the BerkenˇŻs Flow from Mustafar (SelvaRey Coconut, Rumchata, Godiva Chocolate, Coconut Water), a somewhat surprisingly sweet and delicious drink to represent an area not known for its happy times.

Non-Alcoholic choices for those seeking them ¨C including kids during the day ¨C include the Cloud City drink and one I tried called the Temple Twist (Apple, Mint, Pineapple, Ginger Beer, Kiwi) which includes a Grogu-inspired adornment on top (see above).

And then of course is that $5000 drinkˇ­ And yes, you read that right. Or youˇŻve already heard about the “Kaiburr Crystal,” which simply says on the menu ˇ°The galaxyˇŻs rarest and most valuable cocktailˇ± with that jaw-dropping price next to it.

Spending $5000 on a single drink sounds unbelievable, of course, but what turned out to be notably elusive on the Christening Cruise (where the Kaiburr Crystal was not yet for sale) was getting anyone from Disney to reveal anything about the drink or what you actually got for spending that much, as my three different attempts didn’t get much more than being told “I don’t know what spies in the galaxy you’ve been talking to.”?Thankfully, theme park reporters Scott Gustin and Arthur Levine were able to get some answers from more?loose lipped members of the crew, learning that buying the drink actually got the person who did so a coveted trip to Skywalker Ranch, where Skywalker Vineyards (which has wines on the Hyperspace Lounge menu) is located. So essentially, you’re paying for the drink, but really paying for the “add on” that is the Skywalker Ranch visit.

As for the actual drink portion you receive in the moment, according to LevineˇŻs write up at aboutthemeparks.fun, ˇ°the galactic beverage is primarily made with Camus cognac. It also includes the Japanese citrus fruit, yuzu, as well as kumquat. Apparently, ritzy cocktails can never have enough cognac, because the Kaiburr Crystal also features Grand Marnier Quintessence, which is considerably pricier than Camus cognac. Speaking of pricey, the bartenders add shots of ultra-expensive Pappy Van Winkle’s Family Reserve 23 Year bourbon and Taylor’s Fladgate Kingsman Edition Very Old Tawny Port.ˇ±

The silver plated glasses the drinks are served in are yours to keep, but not, alas, the very cool presentation they arrive in when you order it in Hyperspace Lounge, a?camtono storage device — as seen in The Empire Strikes Back and The Mandalorian — with working gears and lights. Yes, all the things you get if you order that drink, including the coveted trip to Skywalker Ranch, are certainly cool, but for $5000, IˇŻd say they should throw in the camtono too!

The Kaiburr Crystal is obviously an extravagance in our galaxy, but it seems like it might be one in the Star Wars galaxy as well. After all, Hyperspace Lounge (where the regular alcoholic drinks are more in the $15-$20 range) certainly is designed to look fancier than, say, your typical Cantina?in the franchise does, whether it be Chalmun’s, OgaˇŻs, or the Nevarro Cantina.

Danny Handke (Senior Creative Director, Walt Disney Imagineering) explained that while the Star Wars: Cargo Bay experience on the Disney Wish reflects the more classic, industrial side of Star Wars (ˇ°Dark and grungyˇ± as he put it), for Hyperspace Lounge, ˇ°We studied ?Canto Bight, the casino planet, and also?Dryden Vos‘s ship, the First Light. We looked at those locations and said ˇ®This is a different kind of Star Wars that’s starting to appear more and more nowadays.ˇŻˇ±

Disembarking morning means Hyperspace Lounge isnˇŻt open and is emptyˇ­ but I could still peek in again before we go. #DisneyWish pic.twitter.com/ZJl4YgWUXR

The group I had drinks with noticed the our table seemed to have the Crimson Dawn logo engraved on it, and Handke explained that rather than indicating we were in a Crimson Dawn-run bar, it was another example of how Hyperspace Lounge is meant to represent many facets of Star Wars, with other such easter eggs strewn throughout, including star maps and other elements sourced from the films and series.

Said Handke, ˇ°WeˇŻre jumping to different time periods, so we can see a little bit of everything [from the series] as a little bit of something for everybody. We want guests to play along as much as they want to.ˇ± And yes, he noted, that might mean dressing the part, if someone was so inclined for a bit of cosplay at sea.