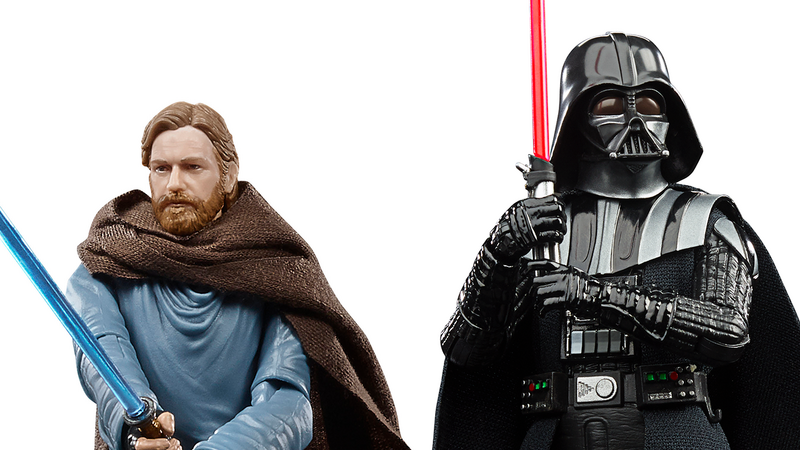 Not to shock anyone, but Star Wars toys are very popular.

At the recent Star Wars Celebration convention in Anaheim, crowds cheered for the debut of new trailers and footage for projects like Andor, Ahsoka, and The Mandalorian?Season 3, and for appearances from folks like Ewan McGregor, Dave Filoni, Jon Favreau, Pedro Pascal, Diego Luna, and?Rosario Dawson. But they also cheered as upcoming action figures were announced and photos were revealed at Hasbro¡¯s packed panel.

Hasbro of course has been in the Star Wars business for decades now. with no sign of slowing down. In fact, with so many new Star Wars series debuting, there¡¯s a ton of new Star Wars toys – and with more than one action figure line to release them in.

At Celebration, I spoke to Hasbro¡¯s Patrick Schneider (Director, Global Brand Strategy & Marketing) and Chris Reiff (Manager, Product Design) about what it¡¯s like knowing Star Wars secrets before anyone else, the continued success of both the?Black Series?and?Vintage Collection?lines, and getting to mix in legacy characters with those being introduced to the public in new content.

I spoke to Schneider and Reiff right on the heels of the premiere of?Obi-Wan Kenobi?on Disney+, which was followed mere hours later by new toy reveals tied to the series.

Regarding what it¡¯s like to continually know secrets regarding something as highly anticipated as a new Star Wars series long before the public, Reiff said, ¡°It’s always fun, but it is also stressful sometimes, especially when you get close to the moment,¡± with Schneider agreeing, “No one wants to fumble at the one yard line.¡±

Added Reiff, ¡°It’s just part of it’s part of what we do. It’s intrinsic to the business for us to do that. We use so many code names. We talk in code. And we live that and secrecy is part of it that makes them exciting. So it makes it exciting for us.¡±

Hasbro had multiple reveals at Celebration of various products for?Lola, the droid character introduced in?Obi-Wan Kenobi that belongs to Princess Leia. Not surprisingly, the Hasbro team said they could quickly see how Lola would make a great toy, with Schneider remarking, ¡°Lucasfilm has, I think, better than any group out there, just an amazing history of creating these iconic, lovable, amazing creatures, from?R2-D2?and?C-3PO?45 years ago through to?Ewoks,?BB-8,?Porgs, and obviously the Child,?Grogu. So when they tell us that Lola is going to be the next in that line, we absolutely trust them. And then we see her and she looks amazing and adorable, and is so interactive, so responsive. And so we were so excited to bring her in the line. And obviously she’s in The Vintage Collection, The Black Series, the Bounty Collection, and electronic. We’re really excited that Lucasfilm partnered with us to get her into the line announced the day that the show aired.¡±

While there are always plenty of toys based on brand new Star Wars projects like The Mandalorian, The Book of Boba Fett, and Obi-Wan Kenobi, both the Black Series and Vintage Collection action figure lines notably frequently introduce new items based on older parts of Star Wars as well, from the original trilogy and prequels or even to the more recent past like 2016’s?Rogue One, which has new Black Series figures for?Saw Gerrera?and?Galen Erso, and an upcoming Vintage Collection release ¨C announced at Celebration ¨C for the droid?R2-SHW.

Said Reiff, ¡°It’s the beauty of Star Wars. There are so many older properties and whenever we can, we want to get back to that stuff and try to build out more and more of those characters. It’s just a juggling act of how much new stuff there is and delivering on all that new stuff and then finding ways to do that so it’s just looking and prioritizing which characters we think fans want. So feedback from the fans on what is important to them, that’s critical to us to make those decisions.¡±

Schneider added, ¡°Rogue One, there are just some characters like Saw Gerrera where it would be criminal to not get them into the line,¡± before laughing, as he admitted Saw was also a personal favorite of his he¡¯d long been hoping for. ¡°That was a passion project to me for a long time and we finally got him in.¡±

For decades, Star Wars figures were primarily available in 3.75-inch scale, but that changed in a notable way with the launch of the incredibly popular Black Series line, which focuses on six inch scale figures. For a time, in fact, there were notably fewer figures in the 3.75-inch scale, but now the Vintage Collection has ramped up its releases and both lines seem to be thriving – along with the 3.75-inch Retro line, which offers more simplistic figures modeled after the ones Kenner made in the 1970s and 1980s.

Said Schneider, of finding this peaceful coexistence between the different lines, ¡°They each definitely serve a distinct purpose. The Black Series, those figures are obviously larger in scale, you’re able to get more detail in there. I’ve heard this from fans here, and we know this from research, the figures are the core there. With Vintage, the figures are a part of the overall expression, I’m sure you know this. It’s about the world, it’s about the environment.¡±

There have been a handful of vehicles for the Black Series line, but it¡¯s not realistic to do too many given the scale, while The Vintage Collection can support toys for the likes of the X-Wing Fighter or the?Millennium Falcon, plus playsets like the?Tantive IV?or?Nevarro Cantina. As Schenider put it, ¡°We know that playsets and creatures and vehicles are much more critical to the Vintage Collection than the Black Series, and so that’s how you see things reflected in both. We do more figures in Black Series, more of that world building in Vintage.¡±

Added Reiff, ¡°Because Vintage is so much about the world building, and has such a huge history going back and touching on figures that are are older or more unique figures to fill out that line, that’s in part at a trade for more new content characters in there. So it’s a balancing act, because we know Vintage fans want all that classic stuff.¡±

OTHER CORNERS OF THE GALAXY?

While there are the core Star Wars films and Disney+ series, there are plenty of other facets to the franchise, including books, comics, and video games. Games in particular has been getting more of a focus of late, with Celebration including reveals for figures for the upcoming Star Wars Jedi: Survivor game, plus announcements that there will be Black Series figures for?Darth Malak and Bastila Shan tied to the release of?Star Wars: Knights of the Old Republic ¡ª Remake.

Said Reiff, of exploring these corners of Star Wars, ¡°Our team is deep in fandom. Eric on the Black Series has been very passionate about getting those gaming figures in and even those two specifically for a while. So it just speaks to how much fandom there is within the team, and us delivering things we want as well. We’re super excited to do that sort of stuff.¡±

Said Schneider, of how they come to decide what characters to do from the past, ¡°It is interesting. We’re fans, but we all bring a real critical analysis to it. We have research as well. Consumer insights do a great job of social scraping and hearing what the community is talking about. We want to make sure that the figures in the line are the figures that the community as a whole wants. Our personal opinions obviously inform that but we draw from a broad array as well to put out the best possible line for the community.¡±

As Reiff put it, ¡°It¡¯s not like there’s one of us making the decision every time we do it. Like Patrick said, it’s looking online and then getting together as a group, having a conversation, juggling different factors and figuring out what we want to do. It’s really fun.¡±

Star Wars Celebration was the first convention Hasbro had attended since the beginning of the pandemic, something both Reiff and Scnheider said they were grateful for, as it allowed them to interact with their fans and see their excitement in person.

Said Reiff, ¡°It’s amazing. I think we’ve all been wanting this for so long. It was just part of the day to day for us was just to go to conventions, meet fans, talk to people, interact in person getting feedback, as part of the cycle. And it’s been missing.¡±

Added Schenider, ¡°I think we rely on these, certainly. This is the chance that the community gets to tell us what they’re thinking, to give us feedback, to tell us what they want. I think we also rely on it to energize us. It’s been tough the past two years. We know that there’s passion for what we do, but being able to see it and be part of the larger Star Wars community has been just amazing.¡±