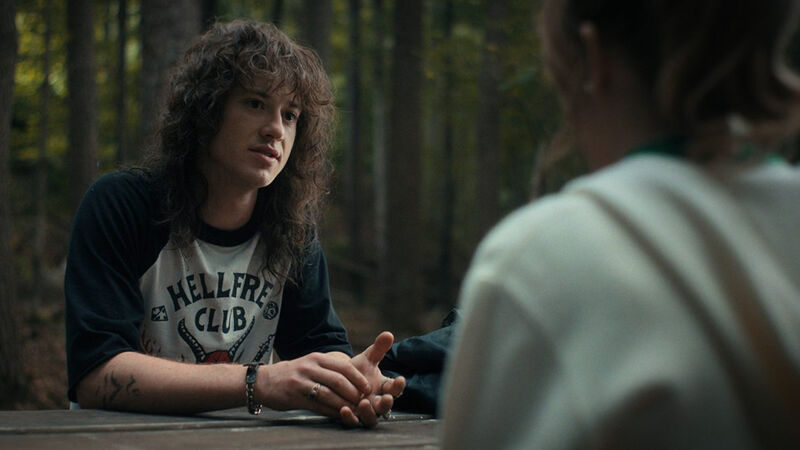 Last weekend saw Part 2 of Stranger Things 4 drop ¨C two feature-length episodes wrapping up the seven near-feature-length episodes that made up Part 1. ThatˇŻs a whole lotta story.?The double-header rounded out a story that saw Eddie Munson and antagonist Vecna amongst the new characters introduced. Such is the love for the Netflix series from creative duo the Duffer Brothers, its extended length drew in a bumper crop of viewers. If reports are true, Stranger Things 4 is record-breaking, with Netflix claiming that this season achieved the biggest opening weekend for an English-language show on the platform with 286.7 million hours of ˇ®viewershipˇŻ. And latest reports suggest itˇŻs the streaming giantˇŻs third show to achieve more than 5 billion minutes of viewing in a week.

Well, Fandom has gathered its own data to help us unpack exactly what it was that those viewers were most engaged with or interested in come the hotly anticipate two-episode finale. WeˇŻve also mined some quotes from the community to give an insight into the fan reaction. See if you agree with our findings ¨C but before you read on, this is your final warning to bookmark this page for later and click away now if you havenˇŻt seen the Stranger Things 4 finale yet! If youˇŻre cool with spoilers, of course, youˇŻre welcome to stayˇ­

Wondering how Stranger Things 4 Part 2 fared against Part 1? Interestingly, it outperformed Part 1 by 8%, meaning a fairly substantially higher proportion of you were checking out the Stranger Things community following the release of episodes 8 and 9.

This is 65% more than Season 3, making Stranger Things 4 Part 2 the highest release weekend for Fandom across all the seriesˇŻ seasons, suggesting that as the show draws closer to its announced final instalment ¨C Season 5 ¨C fans are invested in seeing how the overarching story starts drawing to its conclusion. They also have questions around how we got to this point as well as where the series might go from here.

Given that some shows continue for season after season without a known end date and start to see audience numbers dropping off, this increase is interesting. It suggests that strategically, the showˇŻs creators have understood how to build and maintain interest in a series, and that fans are arguably more engaged when they know that the time they invest in something will pay off. The inference is that they anticipate a properly planned and executed conclusion and thereˇŻs an underlying belief that the show will avoid meandering with no fear of it meeting sudden cancellation.

It could, of course, also suggest a lack of love for Season 3. ThereˇŻs some discussion within the Fandom community about why some dislike the third season or label it their least favourite ¨C but even if thatˇŻs the case, it hasnˇŻt diminished interest in Season 4 if our figures ¨C and NetflixˇŻs — are anything to go by.

Eddie Munson is Number One

So, which of the Stranger Things wiki pages drew most traffic, and why? The top page was new character Eddie Munson ¨C the heavy metal-loving head of the Hawkins High School D&D group, the Hellfire Club. Fandom data tells us that fans always gravitate towards looking up characters that [WE SPOILER-WARNED YOU] die. Eddie Munson is no exception ¨C but what does make him exceptional is that he became our #1 page across the entire site with a 745% jump in pageviews.

It’s fair to say that Eddie, played by Joseph Quinn, was also popular in his own right aside from the bump in interest the fate he meets affords him ¨C though his death did cement him as another Stranger Things legend in the vein of Barb (Shannon Purser) and Bob (Sean Astin) who died tragic and/or heroic deaths and were taken too soon. In fact, thereˇŻs already a #JusticeForEddie campaign kicking off.

Stranger Things wiki member Sandpapereater5 wrote in the community discussion: ˇ°*SPOILERS* I think they are gonna bring back someone next season ˇ­ Eddie because he donˇŻt [sic] deserve to die and it was too early.ˇ±

S¨¦rginho1973 agrees: ˇ°I think Eddie will come back to life, as his body was left in the Upside Down (there?s no way Dustin could drag him back to our world) and he has to have his name cleaned.ˇ±

While PurplePigeon742 had this to say in favour of Eddie: ˇ°Eddie was better than Steve (Steve is still good I just prefer Eddie donˇŻt kill me)ˇ±

Reyrey27 added: ˇ°They ˇ­ actually killed off such an amazing new addition to the party (Eddie) who I adored and may or may not [have] had a crush on.ˇ±

Another fact we know about wiki users is that they are drawn to Villains ¨C something weˇŻve chatted about recently with the stars of new horror film The Black Phone. You can click on that interview at the bottom of this article. It follows, then, that the next most-visited page following the Part 2 drop is Vecna’s.

VecnaˇŻs page saw a 228% jump in visitors with fans looking to learn more about him ahead of Season 5. The Duffer Brothers have recently confirmed that Season 4ˇŻs big bad who is also known as Henry, or Number One, will be back for Season 5.

In Season 4, we learned that as a child, young Henry Creel possessed psychic powers and could see into the minds of living things. However, we donˇŻt learn how he got those powers, which has led community member Haider77 to run a poll on a discussion page asking how fans think he got his powers. Spoiler: 83% of respondents think heˇŻs had them since he was born. In Season 5, perhaps weˇŻll find out.

Fourth most visited page on the Stranger Things wiki, behind the home page at #3, is another character who at one point appeared destined to die but whose fate is as yet undecided: Max. MaxˇŻs page saw a huge 655% bump in pageviews.

A poll by Godzillafan1978 asks: ˇ°What do you think will happen to Max in Season 5 ¨C sheˇŻll make a full recovery; sheˇŻll wake but have some lasting effects; sheˇŻs going to die?ˇ± 82% of people who responded voted that sheˇŻs likely to come round but suffer lasting effects.

Fisher Fan thinks that ˇ°she’ll end up blind, or at least in a wheelchair. If they have her completely recover, it will weaken the effect of her “death” scene and reveal just how low the stakes are in this show.ˇ±

Fans are already speculating about what Season 5 will hold. The final season, according to Jim Hopper actor David Harbour, will likely begin filming next year and will probably hit screens in summer 2024. But until then, take a look at what some Fandom Stranger Things community members want to see happen:

WHAT ABOUT MORE SCREEN TIME FOR WILL? WHAT ABOUT HIS COMING OUT (EVEN THO IT KINDA HAPPENED IN EP 8)? WILL HE FINALLY GET TO HAPPILY PLAY D&D??? — Reyrey27

IMA TYPE IN ALL CAPS SINCE THATS WHAT EVERYONE ELSE IS DOING. I HOPE THEY BRING BACK EDDIE BUT YˇŻKNOW, THEY PROBABLY WONˇŻT BUT I AINT GIVING UP HOPE! — JanoPotato01

YOO WHAT IF EDDIES GHOSTS COMES OR SOMETHING ? — LincolnLoudfan01

Can we literally just keep Mileven and Lumax happily together for a season without adding arguments and childish breakups? ? — Ringoisking

Max to wake up — KingValeska

It’s too late Hawkins will fall into the Upside Down. — Jaden Hartson

Guccigang2121 had this final thought: ˇ°Eleven has always been a strange girl but THAT is the final straw ˇ­ She likes pineapple on pizza.”

Below, check out our interview with Ethan Hawke and director Scott Derrickson in which they discuss what makes The Black Phone antagonist, The Grabber, a great horror villain.