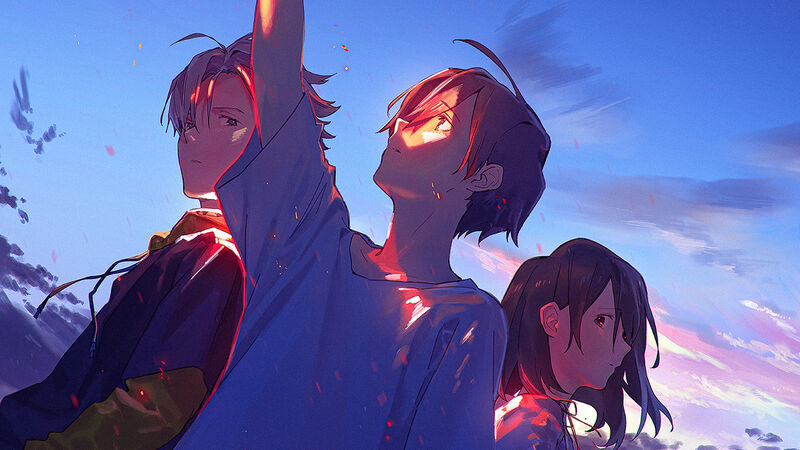 Why Gorgeous New Anime ‘Summer Ghost’ Is a Game Changer

There’s a new anime film making waves. The 40-minute animation is a beautifully conceived, emotionally heavyweight, and visually stunning piece of storytelling that is as haunting as it is aesthetically pleasing. A tale about three troubled teenagers contemplating life, Summer Ghost traces their journeys as they come together to test a local legend — a legend that says lighting fireworks in a specific location will call the ‘summer ghost’, a spirit purportedly able to answer their most pressing questions.

When Ayane appears, she reveals that only those who are “about to touch their death” are able to see her. As one of the trio, Tomoya, becomes increasingly obsessed with Ayane and uncovering her story, he visits her alone and gradually learns more about her, and why she appears to him.

Since its release in Japan in November 2021, the film has received acclaim around the world. In May 2022, Summer Ghost was screened at a special Q&A event with director loundraw at London’s British Film Institute (BFI). The film will premiere in the US on animation platform GKIDS later this year – and you are urged not to miss it.

From Sketch to Screen

There’s a lot of excitement building around loundraw, an illustrator and animator known for his work on I want to eat your pancreas and Josee, The Tiger and the Fish, and for whom Summer Ghost marks his directorial debut. The film is assured and distinctive, touching on universal themes as well as feeling intensely personal. The film was inspired by a sketch of loundraw’s, and he carries his pared-back style into Summer Ghost – a film he was compelled to bring to life by creating his own animation house, Flat Studio.

“It’s true, [the film was inspired by] a picture that I drew in 2018 entitled ‘Summer Ghost’,” loundraw tells Fandom as we meet ahead of his BFI appearance. “At the time, I was very busy working as an illustrator, which was great. But gradually, people started asking me to do the same things, the same sorts of things that I’ve done before, because that was the sort of thing that I was getting known for. And that was difficult for me. And so I drew this picture as something that was just for me; this was what I wanted to do. My feelings were sort of overlapped with those of the characters — and I thought it would make a good film.”

The director had made a short graduation film – a trailer for a fake film – and someone reached out to him to ask if he’d be interested in making a film proper. It was this that sparked his imagination and initially set the wheels in motion.

Feelings of discontent around his place in the industry were already bubbling inside loundraw, as he describes, and so he felt that the answer to the growing sense that the direction he wanted to take his work in didn’t fit the standard model lay in creating Flat Studio. This would allow him to set his own, new parameters and give himself creative freedom.

“I realized that I couldn’t make the work I wanted to make within the existing structure,” says loundraw. “So I’ve been training up staff to create something that I think only we are able to do. In the future that will include full feature-length films. And that’s the aim for now.”

It’s his style of illustration and animation that were problematic, in loundraw’s experience, to an industry that loves fine detail. For all the brilliance of traditional anime — a rightfully beloved and admired artform/genre/medium/all of the above — it makes sense to believe that there’s room for experimentation with style and more. When you watch Summer Ghost, you instantly understand not only how stop-you-in-your-tracks beautiful loundraw’s work is but also how effective it is in terms of conveying theme and emotion.

“What I want to do is to animate my own drawings,” says loundraw, suggesting he doesn’t want to compromise to fit someone else’s idea of what anime should look like. “I’m often told that my drawings lack detail. There’s a lot of blank space, few lines, and that is something that’s actually very difficult to do in animation. If you have the time to add more detail, then it’s easy to create higher quality work with more detail. But to create high quality with less detail, you really need to understand the essence of something. And that’s something I’ve spent time with the staff [at Flat Studio] working on.”

The results are plain to see in Summer Ghost. But not only is the film deeply visually striking, it’s also profound thematically.

Why We Live or (The Unexpected Virtue of Ignorance)

“The theme for me that I wanted to tackle was why we live, which is the same at the end of the day as how we want to die,” explains the director. “And that ties into why I want to make films despite the fact that it’s really hard. Why am I doing this? Why I want to keep doing this links into my relationship with and my approach to death.”

loundraw says that the four characters in the film – Tomoya, Aoi, Ryō, and Ayane – are based on aspects of his own personality, with the intention of encouraging the audience to empathise with at least one of the characters, who each has their own struggles, at the same time as making it universal. And when asked about what films influenced Summer Ghost, loundraw cites a surprising 2014 Oscar-winner – Alejandro G I?árritu’s Birdman.

“I like the use of colour and the single-take structure. It’s something that I have shown to the staff in the studio and said this is the kind of quality that we need to aim for,” says loundraw.

Another of the animator’s favourite films – his number one film in fact — that you might see traces of in Summer Ghost is Satoshi Kon’s Tokyo Godfathers. The 2003 anime features a trio of main characters each with their own struggles and also can be said to deal with the themes of ‘why we live’, and death. “I love it and he’s really good technically. I love the concept — a little bit of happiness in daily life.”

loundraw also references Studio Ghibli’s 1995 smash Whisper of the Heart, the only film directed by Yoshifumi Kondu before his death, with a screenplay by Hayao Miyazaki. “I really appreciate it when someone can make something ordinary look special. And I think that’s the mark of a true artist, to be able to do that — to have that ability and skill. I think this is an amazing film.”

There’s a Manga and Two Novels…

Often, anime films are based on a manga but in the case of Summer Ghost, the opposite is true. The film has spawned a manga, by Yoshi Inomi. Is this the ultimate validation?

“It could be seen as validation, I guess,” says loundraw. “It maybe shows that people enjoyed the film. I really like Inomi’s work. She sent the drafts, but I basically didn’t do anything to them. Because I respect her work and with this story, the ending is really important and the ending is already there, and that’s set. So I wasn’t really concerned in that sense.”

With two follow-up novels by Summer Ghost scriptwriter Hirotaka “Otsuichi” Adachi, whose space horror anime series, Exception, is due to debut on Netflix soon, also published – one expanding the story, the other a spin-off – can we expect to see another Summer Ghost film?

“It’s interesting for me how the focus changes depending on who’s writing it,” begins loundraw. “So Inomi-san, in the manga, focused on the character of Aoi, whereas Adachi, in the novel, focused on the character of Tomoya, so that’s interesting for me. I would like to write a sequel but I think maybe it’s not necessary. Maybe this is the length that Summer Ghost was meant to be.”

So what’s next, then, for loundraw and Flat Studio?

“I’m still at the trying to think of a story stage so I’m happy to talk about it,” he says. “The theme is going to be about relationships because Summer Ghost is about looking inwards. Next, I want to look outwards to society, to relationships with other people. And that gives rise to a different set of questions. And it kind of overlaps with my own experience of going from working by myself to building a team and working on a film all together — so this feels like the right next step for me.”

Going by the incredible achievement of Summer Ghost, loundraw’s next project, a bit like the spirit Ayane in the film, looks set to arrive with a blaze of fireworks. We’re waiting with bated breath.

Love anime? Below, check out our interview with legendary director Mamoru Hosoda, who discusses the brilliant Belle and how close we are to the film’s futuristic themes becoming reality.?