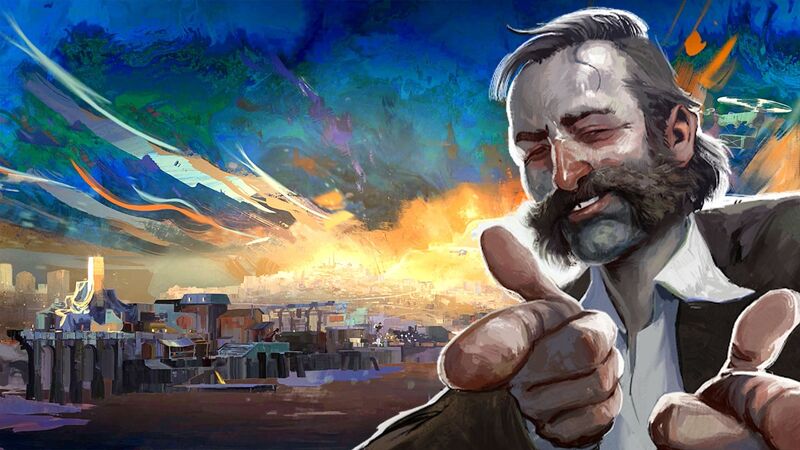 ThereˇŻs a scene in the beloved 2019 RPG?Disco Elysium where the main character sings karaoke. It happens pretty far into the game, after youˇŻve convinced the hotel owner to let you perform and youˇŻve found a sad enough song for your character to jam to.

Like most things in Disco Elysium, there are multiple ways the scene can play out. However, in this particular scene, there are just two: your character sings the maudlin ballad ˇ°The Smallest Church in Saint-Sa?nsˇ± pretty badly, or he sings it hilariously badly. There is no version of events where Harry Du Bois reveals himself to be a secret theater kid with serious singing chops. No, he sucks complete ass either way, but in one version he sounds like an especially awful cat in heat, while in the other heˇŻs more like your dad singing Bobby Darin songs after a couple ModelosˇŞnot good, per se, but at least a little charming.

I think it might be the best scene in the game.

But to understand why, we need to go into how the game works, because this scene is a moment where the game is working perfectly.

Disco Elysium boasts a deeply Byzantine game design, borrowing from the toolkits of tabletop RPGs, immersive sims, point-and-click adventures, and much more. Together, these interconnecting systems form an inscrutable whole, one that exists almost entirely to inform its complex network of dialogue options.

Unlike other titles where separate systems support one or two facets of gameplay, Disco Elysium funnels everything towards its dialogue. All skills are tailored to that end alone. There are no boss fights or quicktime events, nor are there any crafting mechanics beyond a few ad hoc item combinations for specific objectives. The entire game could be pared down to a text-based adventure, with no visuals beyond the words on the screen, and the player could still get the essential gist of every major event.

Producing satisfying narrative results with a system like this is challenging, especially since said narrative is driven by the playerˇŻs various in-game skill levels. Each skill acts as a literal voice in the main characterˇŻs head, shaping his inner monologue¨Cand, thereby, his perspective¨Con whatever is happening in wildly different ways. A higher Inland Empire score, for instance, will create a protagonist with an imaginative, often anthropomorphizing view of the world and the objects in it; Shivers will give him startling intuitions about the state of the city in even its most distant locales. They are different ways of knowing the world.

Presented unevenly, this could make for a character whose erratic thoughts are so often at odds with one another that they become illegible. But Disco Elysium manages to construct its richly detailed world through the subjective lens of a drug-addled amnesiac without it ever feeling like his Inside Out sprites are just taking turns being at the controls.

The gameˇŻs most important tool is the license it gives itself to recontextualize the playerˇŻs knowledge. The protagonist, being the audience surrogate, has completely forgotten pretty much everything about his own world, allowing us to piece together histories both personal and macroscopic along with him. This gives the game opportunities to exposition dumpˇŞwhich it does, but never at the expense of the more personal story and stakes.

The rich lore of Disco ElysiumˇŻs world always serves to reinforce character, rather than merely showcase the creatorsˇŻ extensive worldbuilding. You donˇŻt have to memorize the complex history of the nation of Seol to know that Kim, a second-generation Seolite, feels exceptional pressure to be an exemplar of a country that still sees him as a foreigner. His perspective represents a broader, real-world picture; it just happens to be painted in the colors of fiction.

And itˇŻs not the only instance of that happening. In order to bring us even more in line with HarryˇŻs distorted psychology, the game doesnˇŻt shy away from using real-world terms and demonstrating how the fictional context affects them. A great example of this is, naturally, communism.

Communists exist in Disco Elysium, and they donˇŻt have some fantastical stand-in title. They call themselves communists; they practice communism. But the ideology has had a very different history in this world. Disco ElyisumˇŻs communism developed out of Mazovian Socio-Economics, the gameˇŻs clear analog for Marxism. Its central figure, Kras Mazov, was also the founder of the powerful Revachol Commune. (Karl could never.) Then, Revachol was annihilated by the moralists of the Coalition, and communism fell out of favor in the country, relegated primarily to collegiate intellectuals.

The player brings their knowledge of communismˇŞlike, our communismˇŞto the game, but most of our historical context (like the Cold War) is irrelevant. Harry brings practically no knowledge whatsoever to the table, so heˇŻs able to learn the new context alongside usˇŞmedium as message. ItˇŻs a clever way to avoid alienating the player by combining the familiar with the foreign. Their history resembles ours, but remixed just enough that the differences stand out.

Even the gameˇŻs title offers recontextualization. The real-world disco phenomenon, famed for its ephemeral fad status and subsequent excision from popular culture, is reimagined in the narrative as a vestige from the counterculture of yesteryear. In this world, disco is more akin to the Summer of Love movement than the cheeseball ABBA records your mom still listens to. (Sorry, Mom. ˇ°Waterlooˇ± still slaps.) The gameˇŻs protagonist sees the genre as the soundtrack to rebellion, to free love and defiant hedonism in the face of worldwide suffering. Same tunes, different memories.

So what does any of this chronic recontextualization have to do with Harry bleating out the most humiliating karaoke cover since Meg Ryan singing ˇ°Surrey With the Fringe On Topˇ±? What if I told you the song he sings is a cover of a real song, one that existed long before the game did?

Okay, so technically itˇŻs not a cover, or at least not a direct one. The real song, ˇ°Smallest Church in Sussex,ˇ± was performed by the band Sea Power as a b-side way back in 2003. ItˇŻs not their most well-known song, but itˇŻs a wistful mix of nostalgia and ennui. ItˇŻs easy to see how it might be slotted into Disco Elysium, whose world always seems to be yearning for a past we never get to see, and one that might not have ever truly been.

Sussex doesnˇŻt exist in this world, but Saint-Sa?ns does, so ˇ°The Smallest Church in Saint-Sa?nsˇ± serves the same mournful purpose, with the bare minimum of lyrical adaptation. All the elements are real; they each have a basis in our world, but our world doesnˇŻt have a Harry Du Bois for them to speak to. From new context comes new meaning.

Which brings us back to The Scene.

YouˇŻve finally managed to convince Garte to let you perform on the stage. YouˇŻve scoured an abandoned house for a tape containing the saddest song imaginable. YouˇŻre about to Jamrock outˇ­when youˇŻre hit with a Drama check. The dice roll.

If you succeed: The lights dim. An electric guitar strums. Harry talk-sings his way through the song in the gravelly voice of his Ancient Reptilian Brain like a cockney William Shatner. ItˇŻs sorrowful, full of pain and regret. A man weˇŻve seen frantically trying to piece his shattered memory back together is singing about a past he canˇŻt remember but wishes he could return to. The present is so full of meaninglessness and hurt that any past could only have been better. ˇ°None of this matters, now. None of this matters, at all.ˇ± The song ends. The crowd murmurs in faint approval. It wasnˇŻt well-sung by any means, but it was a touching performance. A connection was made. ThatˇŻs as valuable as anything, in this world.

If you fail: The lights dim. An electric guitar strums. Harry begins to caterwaul in his Limbic SystemˇŻs painful falsetto, utterly at odds with the gauzy instrumental backing. ItˇŻs the sound of an incredibly drunk, incredibly manic man making an incredible ass of himself on stage. By the end, heˇŻs basically keeled over, groaning into the mic. It sounds like shit to the very last note. One person claps politely. Harry begins to chastise the audience for their less-than-enthused response until Garte unplugs the sound system. EveryoneˇŻs a little more miserable tonight. ItˇŻs a sorrowful sight for a very different reason.

This truly is the game at its best. A playerˇŻs Drama level can make or break HarryˇŻs performance in more ways than one. The consequence isnˇŻt one of gameplayˇŞnothing in the plot appreciably changes whether you pass the check or not. Rather, itˇŻs a consequence of narrative.

Will you see your Harry as a sullen drifter, quietly contemplating how peeling away the layers of his past reveals nothing but echoing mediocrities and failures, aching to exist somewhere outside of memory entirely, in the liminal space of a tiny church? Or will you see him as he sees himself: a loud, anarchic drunk who can only ever seem to screw things up even after reverting to factory settings? This isnˇŻt about a number going up or down; itˇŻs about how you change as a person. It proves why this story has to be a game.

The way the gameˇŻs systems interact brings vitality to the labyrinthine worldbuilding in a manner unlike any other game (to my knowledge) has ever quite accomplished. The karaoke scene is the apotheosis of that brilliant design, demonstrating how a single shift in context can make all the difference. Either way, HarryˇŻs song leaves us feeling sorry for him, but the way we see him afterwards is completely different based on the results of a single dice roll.

You may be asking: why ˇ°Smallest Church in Sussexˇ± in particular? Why use an obscure song by a band few players have actually heard of? Well, thatˇŻs the thing: theyˇŻre familiar with Sea Power, even if they donˇŻt realize it. After all, theyˇŻve been listening to them all game. Their sound has permeated the playerˇŻs entire experience in the world of Disco Elysium, distant horns and all. Knowing things is funny that way.