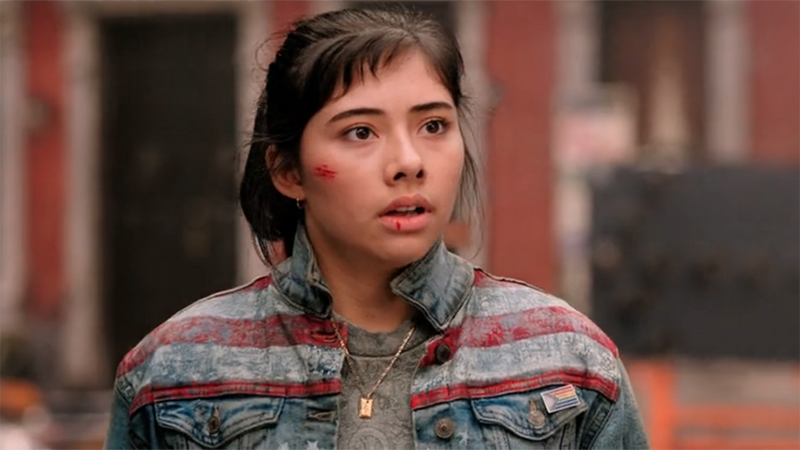 Warning: Spoilers follow for Doctor Strange in the Multiverse of Madness.?

On the heels of its Digital release, Doctor Strange in the Multiverse of Madness was released on 4K Ultra HD, Blu-ray, and DVD this past week, including a number of special features. Among those is a spotlight on one of the film¡¯s big new introductions to the MCU: America Chavez.?Played by?16-year-old Xochitl Gomez (The Babysitter¡¯s Club), America has the rather amazing power to open portals between the countless realities within the Multiverse, which makes her the target of the Scarlet Witch in the film.

Of course, the MCU is hardly done with the Multiverse in the wake of the Doctor Strange sequel, and in fact, its significance was underlined by Kevin Feige at Marvel Studios¡¯ huge Hall H presentation at San Diego Comic-Con this past weekend. In the wake of those announcements, I spoke to Gomez about joining the MCU, working with folks like?Benedict Cumberbatch and Director?Sam Raimi, and just how much she took note of the name of the next overall Saga in the MCU, given the character she plays¡­

Though we¡¯ll leave it up to you (and Kevin Feige) to decide if she¡¯s telling the truth or pulling an Andrew Garfield, Gomez stressed that when it comes to what’s next for America Chavez in the MCU, ¡°They haven’t told me what’s next for my character!¡± Still, I mentioned that after hearing from Feige at Comic-Con that the entirety of Phase Four, Phase Five and Phase Six was now known as?The Multiverse Saga, it was hard to not think about the fact that she played the character with the superpower to jump between the worlds that make up said Multiverse.

Admitted Gomez, ¡°Like you said, I can’t really ignore the fact that America’s powers are traveling the Multiverse and coincidentally, you know, the next chapter of the MCU is called The Multiverse Saga. I don’t know… But they haven’t told me anything. So I’m just gonna say?¡®fingers crossed¡¯ and just think that I could possibly be in that. And I’d be so happy with that, because that’s pretty insane. Just the Multiverse in general is insane.¡±

Multiverse of Madness ended with America now living in?Kamar-Taj, receiving training in sorcery. ¡°She’s learning the Mystic Arts, which is very cool and different than what her actual powers are,¡± Gomez noted, saying she was intrigued to see how those abilities could be merged with her powers. ¡°I think she’ll learn some structure and discipline from Wong. And I’m glad that she’s spending time there to find a place where she truly feels like she belongs and kind of has a family.¡±

Gomez had to learn the intricate hand movement the Masters of the Mystic Arts?like Doctor Strange and Wong are always seen performing for the end of the film, and remarked, ¡°It was really fun to do that, because it’s not like stunts. It’s a whole other type of art. I really enjoyed doing all that and I still have it all memorized. I loved it. That choreography was really fun and I really hope I get to do more of it.¡±

Iron Man was released in 2008, just two years after Gomez was born, meaning she can¡¯t really remember a time without the MCU. So what was it like to now suddenly find herself a part of that world and sharing the screen with the likes of Benedict Cumberbatch as Doctor Strange and Elizabeth Olsen as the Scarlet Witch?

Though she came to think of them as her colleagues and friends, Gomez did laugh about the adjustment it took, recalling seeing Cumberbatch on set in his Doctor Strange costume on her first day of filming.

¡°He came in with the whole Cloak of Levitation and all that, and I was like, ¡°Hmm, this is real!? No way.¡¯ But then I just had to cover it up with confidence and just be like, ‘Okay, you¡¯re all set! And this is a normal day on set. And this is how it’s gonna go.¡¯ And then soon enough, it just became like that. It was just like, ¡®This is it. This is life!¡¯¡±

On the special features for Doctor Strange in the Multiverse of Madness, the filmmakers comment more than once about how impressed they were by Gomez and how willing and eager she was to do her own stunts – sometimes more than could be legally allowed given her age (on top of her being one of their lead actors).

Gomez laughed when this was brought up, confirming she did indeed enjoy this aspect of making an MCU film. Asked about a favorite stunt, she explained, ¡°There was a really fun stunt that actually didn’t end up getting used, but it was the bus,¡± referring to some additional shots trimmed from the moment when America runs inside a bus during the creature Gargantos¡¯ rampage early in the movie.

¡°We shot this clip of me actually in the bus. It was me running and then from me running, they tilted me to make it look like the bus was actually getting lifted up. It was a trippy shot that they did. That didn’t get used, but it was really fun. It was really cool and something I’ve never done before. Also, when the cloak pulls me from the street, that was something I’d never done before because it was actually on a little tuning fork situation. And I could not feel anything. I was like, ¡®What is this?¡¯ and it was all like core work. And I was like, ¡®Oh, I’ve really got to work on that!¡¯¡±

It¡¯s clear watching the behind the scenes material that even when backgrounds were added via digital effects, there were a lot of practical sets in the film, something Gomez said surprised her a bit. ¡°I thought a lot of it was going to be green screen. And it was pretty crazy when I realized that no; like Mount Wundagore, the whole statue, Wanda¡¯s statue [was real]. And the Strange statue, that was actually real. They fully built that.¡±

Also impressive was the New York street built for the film¡¯s London production, where all manner of explosions and mayhem were performed live. Recounted Gomez, ¡°All the things that fell down, the fire hydrant¡­ And all the cars especially, in that one scene where you see Christine and Strange walking in Sinister Strange¡¯s world, and those cars are? floating. They were actually floating. They were wires holding it and they were turning and everything.¡±

Gomez said she was fascinated by Director Sam Raimi and his trademark, fast-moving, often heavily zoomed in shots, noting, ¡°He¡¯s so experimental with the camera. There was this one shot I don’t actually think got used either where this camera was behind me and it was this slow motion [shot]. It was this turn I was doing in Kamar-Taj, and I was supposed to kind of sense Wanda. And this camera was right behind my shoulder and I was sitting on a stool and [the stool] was moving as well. It was this whole machine. And when I turned, the camera was right here [motions to her face] and I was just like, ¡®Oh, what are we shooting…? My eyes, isn’t it? We’re shooting my eyes!¡¯¡±

Added Gomez, with a grin, ¡°I’ve never had someone shoot my eyes so much before, but he loves the eyes!¡±

It¡¯s difficult not to wonder if some form of the comic book Young Avengers are on their way to the MCU, given all the young heroes we¡¯re meeting these days.?While we wait to see if we¡¯ll get an onscreen team-up between the likes of America Chavez and Ms. Marvel, Gomez and Iman Vellani did have dinner together to connect as two new faces of the MCU, and Gomez has been getting to know many other young new MCU actors as well.

Said Gomez, ¡°What’s really important for me is that I get to kind of form a friendship with these girls, especially because not only are we girls in Marvel, but also, they’re just very sweet, kind girls. And I really think it’s important because obviously I grew up with Chris Hemsworth and Chris Evans and Scarlett Johansson and they all had this kind of bond. Not only was it nice to see the characters, but also see their friendships. It¡¯s so important to me that I actually got to form friendships with these people, and Iman is just the sweetest, cutest girl ever. I love her so much and having dinner with her just also made me feel like I had someone that I could relate to. And just also hearing her talk about all of her Marvel nerdiness, I loved it. Watching her, I was like, ¡®I feel so comfortable with you.¡¯¡±

While we¡¯ll have to wait and see what role America Chavez plays in the MCU going forward, Gomez¡¯ potential jobs are expanding as she has now added Director to her resume, recently co-directing a music video for GiaNina Paolantonio alongside Luke Eisner.

As Gomez explained, ¡°I’ve always wanted to try directing. And I had this time on my hands, because also just finding the right project after Marvel is hard. And I was like, well, I want to also just find my skill for directing because it’s something that I’ve always wanted to do. And I started reaching out to people and I co-directed my first music video with a friend of mine. I’m learning so much, and I’ve got some other projects on the horizon that are coming. I’ve got some booked up, and I’m really excited. And hopefully, I get to actually fully direct my own [project] instead of co-directing, although I do love that because I get to learn a lot. I’ve been learning lots and lots. It’s hard work, but it’s fun.¡±